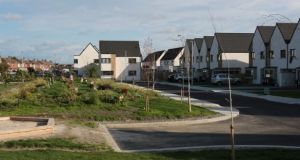 Gardaí have arrested a man for questioning about the extortion of money from construction companies working on public housing schemes in Dublin.

While those behind the crime are gangland criminals, the man arrested on Thursday works for Dublin City Council.

The two criminals who ran the extortion racket received more than €550,000 over two years.

While the Criminal Assets Bureau (Cab) case against the men involved in the extortion – Ballyfermot criminals Derek O’Driscoll (46) and David Reilly (36) – has concluded, a criminal investigation continues.

Almost €300,000 of that sum remained in bank accounts and was frozen when the Cab began investigating the men.

When the Cab case was concluded in the High Court in October the Government and Dublin City Council came under extreme pressure to explain how gangland criminals were able to extort so much money from contractors building housing for the council.

It emerged the Government had been warned as far back as late 2016 that the construction sites in Cherry Orchard were being subjected to attack.

After full details of the Cab case were revealed by The Irish Times in October, Dublin City Council said it “does not condone the payment of protection money by any of its contractors” and “no payments were made by the City Council to the individuals concerned”.

It also pledged to carry out an independent investigation, the results of which are due shortly.

The Cab is involved in the confiscation of money and other assets deemed the proceeds of crime.

A separate criminal investigation now under way by gardaí from the Dublin Metropolitan West Division is attempting to gather sufficient evidence to bring criminal charges against suspects.

In reply to queries from The Irish Times on Friday, Garda Headquarters said a man in his 60s was arrested on Thursday as part of the criminal investigation.

“The male was detained at Clondalkin Garda station under Section 4 of the Criminal Justice Act 1984,” the Garda said.

“He has since been released without charge. A file is being prepared for the Director of Public Prosecutions. ”

The reply added that as the investigation was ongoing, detectives were appealing to anyone with information to come forward in confidence.

The criminal investigation now under way has received information unearthed by the Cab inquiry, though the criminal inquiry is independent to the bureau’s case.

While they have been better known from drug dealing for most of the past two decades, when building work got under way on a number of Dublin City Council housing schemes in Cherry Orchard they targeted contractors on the sites.

Gardaí believe the men directed others under their control to attack the construction sites.

These attacks included arson attacks on plant machinery and Portakabins and driving stolen cars into the perimeter fencing around the sites.

Reilly then offered his and O’Driscoll’s “fence maintenance” services, saying if the contractors paid them thousands of euro each week the attacks would stop.

For the companies that agreed and began paying, the attacks ceased immediately.

For those who initially declined to pay, the antisocial-behaviour attacks continued until the companies relented and paid, at which point the violence ended immediately.