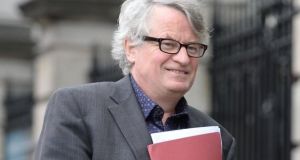 Not a single human rights concern has been effectively resolved in the North, the Chief Commissioner of the Northern Ireland Human Rights Commission (NIHRC) has said.

In its annual statement, which was launched at Stormont on Tuesday afternoon, the Commission warned that the continued lack of a devolved government in Northern Ireland has left outstanding human rights issues to “drift indefinitely”.

While the “optimum position” was to see the Assembly restored as soon as possible, the Commission said that in its continued absence these issues should be dealt with by the UK government and UK parliament, or by the courts.

The NIHRC statement identified thirteen “red issues” which may be an ongoing violation or abuse of human rights within Northern Ireland, and which require immediate action.

These include the continued failure to implement the measures contained in the 2014 Stormont House Agreement for investigating Troubles-related deaths.

“The need to deal with the past in a human rights compliant way and complete outstanding legacy investigations remains on hold with legislation stalled,” the report stated. “Not for the first time, the Commission has highlighted the unacceptable nature of this protracted delay.”

Among the statement’s recommendations is that an anti-poverty strategy be implemented as soon as possible to ameliorate the “disproportionate adverse impact” of changes to social security measures on the most vulnerable in society.

The Commission welcomed the decriminalisation of abortion services in Northern Ireland and said they should be “fully implemented within the determined timeframe” and in line with United Nations recommendations.

The statement further highlighted 59 “amber” issues which are not at a level that constitutes an abuse of human rights, but which nevertheless require action from either the UK government, a Northern Ireland Executive, or the relevant public authority.

The Chief Commissioner, Les Allamby said that the continued absence of a devolved government in Northern Ireland had “practical consequences that extend beyond politics.”

He cited the current crisis in healthcare provision in Northern Ireland, and rising poverty and homeless figures. Statistics released by the Bureau of Investigative Journalism earlier this year revealed that 205 homeless people died in Northern Ireland in the preceding 18 months, more than a quarter of all homeless deaths in the UK.

While Mr Allamby said this was in part down to a disparity in the way the figures are recorded, he said that “behind every death is an individual story and a wider tale of society’s failure to properly protect vulnerable people.”

The statement, he said, “demonstrates that not one human rights concern has been effectively resolved in Northern Ireland.

“Whilst we welcome the movement on human rights compliant laws around termination of pregnancy, the introduction of same sex marriage, and redress for victims of historical institutional abuse, so many other issues affecting victim rights, housing and healthcare remain unresolved.

“The UK Government has a legal obligation to tackle these outstanding human rights issues, outlined in today’s report, without hesitation,” he said.