Covid-19 vaccines: When will they be available and who will get them first?

Q&A - Everything we know so far about coronavirus vaccines 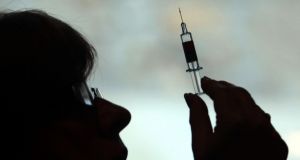 Tánaiste Leo Varadkar said he is ‘very optimistic’ that those most at risk will be able to be vaccinated in the first quarter of 2021. File photograph: David Cheskin/PA

How are the various Covid-19 vaccines progressing?

There are two vaccine front-runners at the moment - namely the Pfizer-BioNTech vaccine and the Moderna vaccine.

Final results from the late-stage trial of the Pfizer-BioNTech vaccine showed it was 95 per cent effective and had no serious side effects.

The company said it now had the required two-months of safety data and would apply for emergency US authorisation within days.

Moderna announced on Monday that its own candidate was 94.5 per cent effective. Moderna expects to get the safety data it needs by the end of the month, allowing it to file for emergency clearance in the coming weeks.

What about the Oxford Covid-19 vaccine?

Mid-stage trial results from the vaccine being developed by British pharma group AstraZeneca and Oxford University has shown it produced a strong immune response in older adults.

The data, reported in part last month but published in full in The Lancet medical journal on Thursday, suggest that those aged over 70 – who are at higher risk of serious illness and death from Covid-19 – could build robust immunity to the pandemic disease, researchers said.

Late-stage, or Phase III, trials are ongoing to confirm the findings and to test whether the vaccine protects against infection with SARS-CoV-2 in a broad range of people, including those with underlying health conditions.

The first efficacy data from those Phase III trials is “possible in the coming weeks”, the Lancet report said.

Is there any more details about the Pfizer-BioNTech trial?

Pfizer said there were 170 cases of Covid-19 in its trial of more than 43,000 volunteers and only eight people with the disease had been given the shot rather than a placebo, meaning the vaccine had a 95 per cent efficacy rate.

Of the 10 people who developed severe Covid-19, one had received the vaccine.

Pfizer and BioNTech said that the vaccine’s efficacy was consistent across age, race and ethnicity.

Pfizer and BioNTech expect to be able to produce up to 50 million vaccine doses globally in 2020 and up to 1.3 billion in 2021.

And what about the Moderna trial?

The Moderna trial involved more than 30,000 participants in the US split into two groups, with one group given two doses of the vaccine and the other group given a placebo.

Based on data from 95 participants with confirmed cases of Covid at least two weeks after the second dose of the vaccine, the researchers report that the vaccine has an efficacy of 94.5 per cent.

In other words, 90 of the Covid cases occurred among participants who had been given placebo jabs, with only five cases occurring among those given the vaccine.

When the team analysed the breakdown for 11 severe cases of Covid, they found all had occurred among those who had received the placebo.

In addition, the researchers say the vaccine has not raised any significant safety concerns. The main side-effects included pain at the injection site at the first dose, and headache, fatigue and pain in the muscles after the second.

Moderna has said it could potentially produce one billion doses of the vaccine by the end of 2021.

How do these vaccines work?

Both the Pfizer-BioNTech vaccine and Moderna vaccine are based on introducing genetic material, known as mRNA, into the human body, which carries instructions for making the “spike proteins” that sit on the outside of the coronavirus and are crucial in allowing the virus to enter human cells.

When this mRNA is introduced to the body, the protein-making machinery within human cells churns out the spike proteins. These proteins are displayed on the outside of the cells, triggering the body’s immune response.

How many doses of the vaccine is Ireland in line to receive?

The European Commission recently finalised a contract for up to 300 million doses of the Covid-19 vaccine developed by Pfizer and BioNTech.

The EU has signed similar contracts for vaccines under development by AstraZeneca, Sanofi-GSK, CureVac and Johnson & Johnson.

All EU member states would get the first vaccines simultaneously, and doses would be allocated according to population size.

Ireland makes up roughly 1.01 per cent of the EU population, so would be in line for just over three million doses of the Pfizer-BioNTech vaccine, if it is ultimately approved.

As mentioned, the Pfizer-BioNTech vaccine is a two-dose treatment, so that would be enough to inoculate over 1.5 million people.

How soon is a vaccine likely to be rolled out in Ireland and who will be first to get it?

Tánaiste Leo Varadkar said on Wednesday he is “very optimistic” that the those most a risk will be able to be vaccinated in the first quarter of the new year.

Separately, Taoiseach Micheál Martin said on Monday a significant rollout of Covid-19 vaccines is unlikely to happen before the middle of next year and priority will initially be given to protecting vulnerable groups and healthcare workers.

Mr Martin said much depends on how quickly the various vaccines under development get regulatory approval, but he was hopeful that Ireland would be in a position to begin mass vaccinations around in the middle of 2021.

Already, the horse trading has begun with a teacher union on Thursday demanding that they be among the first to get the vaccine when it becomes available.