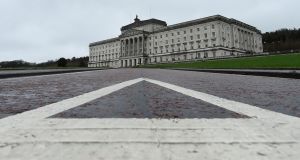 Stormont, Belfast: The data on demographic change has resurfaced in debate following the election in Northern Ireland, but for years the obvious implications of the census trend were ignored. Photograph: Clodagh Kilcoyne/Reuters

Northern Ireland’s constitutional status changed some years ago, but no one noticed. The place that was once known as a contested territory became a state in denial.

Over the last decade, many people who should have known better have shut their eyes to the seismic shifts taking place around them. Now Brexit, for all its dangers, may be the helpful nudge Northern Ireland needs to wake up.

The 2011 census confirmed that the Protestant population had lost its historic majority, dropping to 48 per cent, while the growing Catholic population was at 45 per cent and projected to become the largest community.

The outcome of the latest Assembly election shows that for the first time unionists are in a minority to the numbers elected from nationalist and centrist parties. This does not necessarily show a “coming of age” of the population trend, but it does indicate the likely direction in the years ahead.

Unionist parties have reacted, however, by circling the wagons and discussing ways to shore up the vote

The data on demographic change has resurfaced in debate following the election, but for years the obvious implications of the census trend were simply ignored. The DUP, instead of seeking to seek the support of the Catholic community, opted instead to antagonise it. Stranger still, when nationalists saw their Irish identity snubbed at Stormont, and consequently lost interest in Assembly elections, large sections of the media presented the lower turnout as proof that nationalists were happy with their lot. Now those voters, who were once the cheerleaders for powersharing, have come out in huge numbers to reward Sinn Féin for crashing the Assembly.

But if sections of the media are playing catch-up on new realities in Northern Ireland, they are not alone. Unionist politicians are said to be shocked to find themselves reduced to minority status at Stormont, but they can hardly be surprised. Some projections suggest there could even be a nationalist voting majority in the next six-10 years. If there was another Assembly election soon, the advantage could swing back to unionism, but the longer-term trend seems clear.

None of this heralds an era of nationalist dominance, but it strengthens the need for parity of esteem between the British and Irish traditions, as well as room for smaller communities to flourish.

Unionist parties have reacted, however, by circling the wagons and discussing ways to shore up the vote.

If unionism is in need of a critical friend, it isn’t finding one in the British government, which wants to retain the support of unionist MPs at Westminster and is also busy keeping a tight rein on Scotland.

There is a failure to grasp the significance of Sinn Féin’s growth in the Dáil, or the signals that northern nationalists may be looking beyond the Belfast Agreement towards a new settlement.

Bizarrely, we must all look to Brexit for hope.

Could there be cross-community support for a deal that protects British and Irish identities, yet also responds to the realities of Brexit?

Amid the renewed division in Northern Ireland, there is evidence of cross-community concern at the likely impact of leaving the EU. While England and Wales voted to leave the EU, Scotland voted to remain, as did Northern Ireland by a 56 per cent majority.

An analysis of voting patterns in the North shows that while unionist constituencies voted in large numbers to leave the EU, middle class unionists showed less enthusiasm.

Could there be cross-community support for a deal that protects British and Irish identities, yet also responds to the realities of Brexit? The renewed calls for a restructuring of the Belfast Agreement to strengthen Dublin’s links with Belfast, creating a form of British-Irish joint authority, would chime with the direction of demographics. Could a “two flags” equation in the North also help solve the Brexit conundrum?

Even before Brexit there was a crisis brewing north of the Border.

Governing parties in Dublin arguably failed to respond properly because they couldn’t see past their desire to halt Sinn Féin’s growth in the Dáil.

Brexit has focused minds, but dealing with it and with the implications of demographic change, will require tackling deeply-ingrained attitudes in the North. Every community in Northern Ireland has suffered and they all deserve the security of a shared future, but delivering progress will require some blunt talk.

Republicans were accused of straining the peace process in the past, but today the focus is elsewhere. If unionist politicians won’t fully embrace the Belfast Agreement, if they don’t want Irish unity, and if they dismiss joint authority, then demographic change could soon raise a challenging question: “Do unionists in Northern Ireland have any other ideas that can win the support of the majority community?”

Steven McCaffery is editor of Belfast news website The Detail