Will Italy be next to reverse out of the EU?

Italian debate on merits of abandoning the euro grows louder 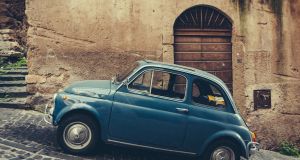 “Italexit” is increasingly on the agenda in Italy. Photograph: iStock

Alberto Bagnai, a professor at Pescara university with a blog called Goofynomics, this week made a typically provocative demand: that the US should promote a controlled end to the euro.

“Undoing the euro will be costly, though less costly than its alternative which is protracted stagnation of the European and hence the world economy, and the growing risk of a major financial collapse,” he wrote.

Such views have made Bagnai a rare Eurosceptic in Italian academia. Detractors say he leads a  “small sect” with “peculiar” views. Yet Bagnai believes the idea that Italy should ditch the euro – possibly dealing a fatal blow to the single currency – is gaining traction.

“I’ve been saying this stuff for seven years, and little by little it’s becoming mainstream,” he says. “Italy is wounded and the hegemonic powers – France and Germany – are buying it up piece by piece. This operation is almost colonial.”

Most Italian economists, government officials and business executives have been staunch advocates of the euro. The public also remains in favour: opinion polls suggest that most support remaining in the single currency despite growing reservations about the EU in general.

All the same, there is little doubt that the ground is shifting in Rome, with debate over Italy’s future in the currency bloc and a possible “Italexit” gathering pace at what euro supporters fear is an alarming pace.

Debate over the future of the euro in Italy mirrors that in other European countries where anti-euro politicians have built up solid support bases. Dutch populist Geert Wilders stood in Wednesday’s Netherlands election on a platform that included ditching the euro, while Marine Le Pen has said that, if elected French president, she would lead the country out of the currency bloc.

In Italy the new frenzy was triggered in January when Mediobanca, an investment bank, published a report that analysed the impact of departure to Italy’s public finances. Antonio Guglielmi, the author, concluded that while an inexpensive EU exit could have been engineered in recent years, that window had closed because of the changing structure of Italian debt. “Whatever the incentive to exit, it is now too late.”

Despite its conclusion, the report was welcomed in Eurosceptic quarters as a sign that a possible exit was on the table and being seriously considered.

On the political front, the euro is rising to the top of the agenda. Both the populist Five Star Movement, which now leads opinion polls in Italy, and the far-right Northern League have floated an exit from the single currency, while Silvio Berlusconi’s centre-right Forza Italia, which is fourth in the polls, has proposed a new parallel currency. Only the ruling centre-left Democratic party (PD) is willing to defend euro membership ahead of the next general election, due within a year.

Filippo Taddei, PD chief economic adviser, views any discussion about Italy leaving the euro as “an embarrassing debate”, with advocates on “very shaky” ground. Yet he believes the time has come to engage, given the backlash.

“The euro is an easy target. People who belong to the reasonable, traditional middle class are starting to ask the question, ‘what if we left?’,” Taddei says. “I see that, I feel that.”

There is also a sense of nostalgia for the patterns of devaluation that kept Italy competitive in the pre-euro era for decades.

But euro supporters say the significant devaluation that would follow any new Italian currency would lead to an inflationary spiral, higher interest rates and a contraction in real wages. “You become competitive, sure, but at the expense of wage earners,” says Taddei, adding that lower-income households would suffer the most as prices rose.

It would also hit the real value of household savings, which could drive families to shift cash abroad, possibly triggering a banking crisis. Such market disruption could be compounded by a rise in bond yields, rekindling the pressure on Italian debt from the euro zone crisis of 2011-12.

But Bagnai challenges the premise of such a large devaluation, saying it would be minimal and not necessarily lead to wage compression. Even if it did, that would not be the worst evil.

“At the moment people are unemployed and their salary is zero, so the point is not what happens to their wages. The real problem is whether they can start working again,” says Bagnai, adding that if there were a recession in a “traumatic” exit it would be followed by a “v-shaped” recovery.

Yet the risk felt by supporters of the single currency in Italy is that the debate could feed on itself.

“What is now an extremely low probability event may turn into a self-fulfilling prophecy, even before any political shift actually happens,” says Lorenzo Codogno, a former chief economist at Italy’s finance ministry now with research firm LC Macro Advisers in London.

“In my view the probability of Italexit remains low – less than 5 per cent – but is rising.” – (Copyright The Financial Times Limited 2017)