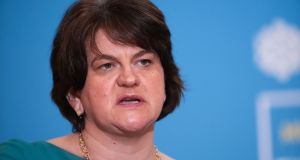 The restrictions were brought to the Assembly by the First Minister, the DUP leader Arlene Foster. Photograph: Kelvin Boyes/Press Eye/ PA Wire

Northern Ireland recorded its highest daily total of new Covid-19 cases on Friday ahead of the introduction of new restrictions aimed at limiting the spread of the virus.

According to the North’s Department of Health, 1,299 people tested positive for the virus in the 24 hours to Friday. These included 315 new cases in Belfast, and 258 in Derry and Strabane.

Two more coronavirus-related deaths were reported, bringing the number of fatalities recorded by the department to 608.

Pubs, restaurants and cafes throughout Northern Ireland closed from 6pm on Friday for four weeks. The half-term holiday for schools has been extended to two weeks, shutting schools until November 2nd.

The leaders of the five parties in the Northern Executive – the DUP, Sinn Féin, SDLP, Ulster Unionists and Alliance – issued a joint statement on Friday evening appealing for everyone in Northern Ireland to abide by the restrictions and to follow the public health guidance.

“We have four weeks to turn this around and we’re appealing to everyone to please get behind this effort to fight back against Covid-19 and save lives,” they said.

It followed a surprise intervention earlier on Friday by the North’s Minister for Agriculture, the DUP’s Edwin Poots, who said he had “grave reservations” about the new restrictions and claimed his party had been overruled at an Executive meeting earlier this week.

“We are in a minority on the Executive, we stated our case but it’s very evident that all of the other parties were prepared to go with this, and therefore that is the outcome,” he told BBC’s Talkback programme.

This was rejected by other parties on the Executive, with the Ulster Unionist leader, Steve Aiken, accusing Mr Poots of undermining the public health message “at a time when the Executive is making the most important decisions that it will ever take in its lifetime”.

“If Edwin Poots feels so strongly in now opposing previously unanimous Executive decisions which his party endorsed, then he should do the honourable thing and consider his position as an Executive Minister,” Mr Aiken said.

The Minister for Justice and Alliance Party leader, Naomi Long, told the BBC the regulations had been agreed by the whole Executive.

The SDLP leader, Colum Eastwood, called on Ms Foster to “rein in” Mr Poots “immediately before he does any further damage to the public health messaging”.

The restrictions, he said, were “uncomfortable for all of us but to turn on Executive colleagues in public is incredible in the current circumstances”.

Mr Poots claimed in the same interview that the North’s chief medical officer, Dr Michael McBride, had told him privately that the areas where the virus had spread were “very identifiable” and this was linked to sport and post-match celebrations.

“There’s certainly an issue around sport,” Mr Poots said. “I know of one event where people went to a bar after winning a particular cup, passed the cup around the bar full of drink, and most of them actually caught Covid.”

Asked if he was referring to the GAA, Mr Poots said he would “leave it to others to do that, I’m not picking on a organisation, but there are certainly those who have engaged in very poor behaviour over the course of the summer months which has helped exacerbate this problem”.

Challenged by the presenter, William Crawley, that “a lot of people will be joining the dots” and would feel “that you’re criticising the GAA community today”, Mr Poots responded that he was “not labelling one particular group of people, but if people feel the cap fits, that’s up to them”.

“There has been significant spread that has taken place and it’s taken place in particular areas and a lot of people are asking the question, why is that the case,” he said, adding that it was “for people to draw their own conclusions”.

Separately, seven coronavirus-related deaths took place in the North in the week ending October 9th, according to figures released on Friday by the Northern Ireland Statistics and Research Agency (Nisra).

It brings the total number of such fatalities recorded by Nisra to 915, over 300 more than the 587 recorded by the North’s Department of Health in the same period.

The Nisra figures are higher than those recorded in the daily statistics released by the department, which focus primarily on hospital deaths and include only people who have tested positive for Covid-19.

Nisra includes all deaths where coronavirus is mentioned on the death certificate, and the person may or may not have tested positive for the virus.

According to Nisra, the deaths of 437 care home residents were linked to coronavirus as of October 9th, with 81 of those deaths occurring in hospital.