Remnants of Atlantic storm passes on Tuesday with Wexford, Cork and Waterford to be hit 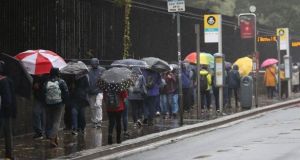 Gale force easterly winds and heavy rain are forecast for much of Munster and Leinster tomorrow.

Met Éireann has issued a weather advisory for Wexford, Cork and Waterford on Tuesday as the remnants of an Atlantic storm passes along the south coast of Ireland.

A combination of high tides, strong winds and heavy bursts of rain will impact the south coast, bringing a risk of flooding during Tuesday.

More generally, strong to gale force easterly winds and heavy rain are forecast for much of Munster and Leinster tomorrow.

Met Éireann said the powerful winds were coming from weather system in the mid-Atlantic which is moving towards Ireland.

While the winds will be powerful they have not prompted a weather warning.

For the rest of the week the weather is set to remain unsettled, cloudy and showery until Friday when dry, sunny spells should develop and continue into the weekend.

The cloudy conditions for the early part of the week will see daytime temperatures around normal for this time of year, in the region of 9 degrees to 12 degrees, with mostly frost free nights.

On Thursday night temperatures will fall to between minus 2 to 3 degrees overnight with a risk of frost.

Temperatures will remain lower on Friday and into the weekend.