No new safety guidelines for slipways after Buncrana tragedy 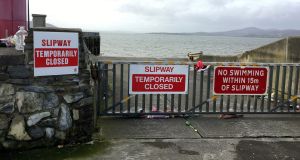 Five weeks after five members of one family died when their car skidded into Lough Swilly, the Department of the Environment has issued no specific direction to local authorities to review the safety of the State’s public slipways and piers.

The Department has said that maintenance is a matter for individual coastal local authorities and has issued no new instructions since the incident at Buncrana, Co Donegal on March 20th.

Sean McGrotty, who was in his late 40s, his two sons Mark (12) and Evan (8), and the boys’ grandmother Ruth Daniels (59) died alongside Mrs Daniels’ daughter Jodi-Lee (14) when Mr McGrotty’s jeep lost its grip on the slipway.

Two investigations are currently taking place into the incident , but neither the Health and Safety Authority nor the Marine Casualty Investigation Board (MCIB) has any remit as it was not a workplace incident and did not involve a vessel.

Donegal County Council has said it will “only decide whether specific measures need to be taken once the facts surrounding the tragedy have been established”, and says it cannot comment further at this point.

The jeep’s location on a lower and exposed part of a slipway designed for ferry use, along with the state of the tide, made for a “one-off” incident in the eyes of some experienced water users.

The circumstances were compounded by the jamming of the vehicle’s electronics controlling windows and doors on contact with water .

Irish Water Safety (IWS) points out slipways can be hazardous for even experienced drivers launching boats. It recommends adequate signage, and says only four-wheel drive vehicles should be used for this activity.

It also recommends that front windows be rolled down, and that all cars operating near water should possess a hammer for breaking glass which can be purchased at low cost from motor equipment shops.

However, Davitt Walsh, who rescued four-month-old Rionaghac-Ann McGrotty from the sinking vehicle, also described the algae on the Buncrana ferry slipway as “lethal”.

Treatment of marine algae which can build up on surfaces exposed to tides has long been acknowledged as a challenge - particularly since certain chemical treatments have been abandoned due to adverse effects on the marine environment.

Power-washing, which is now the norm in many areas, is very labour intensive.

The IWS says it was assured by relevant city and county councils at a recent conference in Kilkenny that safety and maintenance reviews are ongoing.

Workplace harbours, such as those used by small inshore vessels and ferries all round, are given priority, and most of them are steam-cleaned every quarter by local authorities, says IWS.

Slipways used mainly for leisure activities such as boating and angling tend to be maintained from late March, it adds.

Port authorities maintain port piers and slipways, while harbour masters in six fishery harbour centres under the direct control of the Department of Agriculture, Food and Marine carry out “regular maintenance and upkeep”, the department says.

In Britain, non-slip matting with anti-bacterial and anti-fungal additives has been described by the national yachting association as “particularly effective” for slipways which are permanently submerged and cannot be treated or jet-washed.

Waterways Ireland, which is responsible for inland waterways only, is due to test a new non-slip type of matting on jetties and moorings on the lower Bannon, Shannon system and three canals. But it has no plans to use it on slipways until the pilot is complete.

NUI Galway chemistry professor Olivier P Thomas said standards should be set here for use of substances which can treat algae for public safety reasons, while also protecting the environment.

He said to his knowledge there was no fully non-toxic material on the market, and research in the field was urgently required to replace synthetic substances with natural treatments.

A product marketed by a Galway company which is described as an “environmentally friendly silicone based protective coating combined with an anti-bacterial agent” has been tested by the lighthouse authority, the Commissioners of Irish Lights (CIL).

The product acts as an anti-fouling agent and prevents the growth of algae and moss in freshwater or marine environments.

CIL said it proved very effective when tested on the north Kish buoy outside Dublin bay, but it has not tried it on slipways and access points.

Britain’s Environmental Agency advises on the safe use of chemicals for treating marine algae but its equivalent here, the Environmental Protection Agency, says it has no remit in this area.

In the meantime, Galway Harbour Company’s decision after the Buncrana deaths to limit access to its slipway has aroused criticism from water users.