Up to 70% of women eligible to vote in 1918 did not use franchise, research suggests 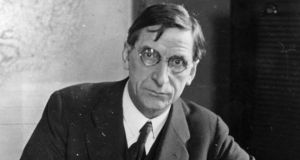 Researchers at Queens University Belfast have challenged the assumption that women voted en masse for Eamon de Valera’s Sinn Féin over a party which sought to deny them the franchise. Photograph: General Photographic Agency/Getty Images

For the last 100 years, it has been widely assumed that a massive extension of the franchise was one of the contributing factors in Sinn Féin’s landslide victory in the 1918 British general election.

The inclusion of all males over the age of 21 and all women over the age of 30 who met a property qualification almost tripled the Irish electorate from 700,000 to 1.9 million.

There had not been a general election since 1910. More than a million people in Ireland voted in the 1918 election on a turnout of 53 per cent.

Sinn Féin won 73 of the 105 parliamentary seats on a 46.9 per cent share of the vote. The Irish Parliamentary Party (IPP), let by John Dillon, which was the dominant party in nationalist politics got 21.7 per cent and Unionists, led by Edward Carson, 25.3 per cent.

As 25 constituencies were uncontested, it is estimated that the Éamon de Valera-led Sinn Féin would have got more than half the vote had every seat been contested.

Two-thirds of the electorate in what is now the Republic supported the party, but only 19 per cent did so in the North where Unionists dominated and the Irish Party was still strong.

An examination of the election by political scientists at Queens University Belfast (QUB) has challenged many of these assumptions.

Though all sections of nationalist Ireland preferred Sinn Féin to the IPP, the researchers noted that neither first-time male voters nor women voted disproportionately for Sinn Féin.

The researchers were able to identify new male voters by looking at the 1918 electoral register and the local election register at the same time.

The research team was Dr Alan de Bromhead and Dr Alan Fernihough from Queen’s Management School, and Professor Enda Hargaden from the Haslam College of Business at the University of Tennessee.

They said Sinn Féin derived its increased support from the middle-classes and even pensioners, though pensioners were financially dependent on the British state at the time.

The highest percentage of women eligible to vote (44 per cent of the electorate) was in the Rathmines constituency which returned a Unionist MP Sir Maurice Dockrell.

The research also suggests that up to 70 per cent of the women eligible to vote in the election did not vote in 1918.

The analysis of the 1918 election was also made possible using digitised census data from 1911. The census data included the breakdown by social class.

The QUB research found that Sinn Féin did worse in the poorest constituencies contrary to the received wisdom that its vote was in many ways a protest vote from the poorest in Irish society.

The researchers concluded that the primary factor in the victory of Sinn Féin and the subsequent defeat of the IPP was the changed political climate as a result of the Easter Rising and the conscription crisis of 1918.

Dr de Bromhead said: “Our research suggest that Sinn Féin’s electoral success was more likely driven by a change of heart on behalf of the Irish electorate, rather than a change in its composition.”