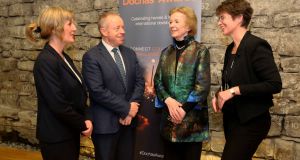 Former President Mary Robinson picked up a Dóchas lifetime achievement on Wednesday night, joking that “a lifetime award is really a way of telling you get off the stage”.

The awards celebrate leaders in the Irish international development sector who are at the forefront of tackling global inequality, poverty and injustice.

Mrs Robinson’s citation recognised her work as president of Ireland, chairwoman of the Elders as well as her role as UN High Commissioner for Human Rights, and acknowledged her life’s work “as an advocate and defender of human rights, climate justice and gender equality”.

In an on-stage interview with Suzanne Keatinge, CEO of Dóchas, Mrs Robinson said she was happy to accept the award but “I’m still not going to get off the stage”.

Mrs Robinson said when there was “a hole in the ozone layer and we all thought we were going to fry” the world acted quickly and came together to ban the kind of chemicals that were causing the hole to worsen. She called for similar urgent action on climate and justice. “The time for talking is over” she said.

Other awards included the global citizen award, presented to Éamonn Meehan, former executive director of Trócaire, the respect and equality in communications award which went to Trócaire for its documentary This Is Palestine and the innovation award to Self Help Africa for the TruTrade trading and payment platform.