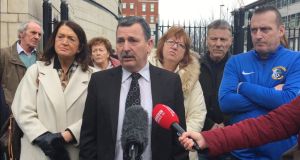 Families bereaved by security force violence have met Karen Bradley to express concern about her controversial comments on state killings.

The Secretary of State for Northern Ireland reached out to a number of victims’ groups following her gaffe.

Some refused to meet Ms Bradley but on Friday morning a delegation of relatives did travel to Stormont House in Belfast to discuss the furore.

Ms Bradley’s remarks in the House of Commons on Wednesday that killings carried out by the British police and military during the Troubles were not crimes, rather actions of people “fulfilling their duties in a dignified and appropriate way”, sparked fury among some victims and political parties.

Ahead of the private meeting with her at Stormont, campaign group Relatives for Justice tweeted a picture of them, saying: “A delegation of families bereaved by the British Army and RUC outside Stormont House on way to meet Karen Bradley, look her in the eye, and tell her what they think.”

Relatives of those killed in shootings involving the army in Ballymurphy in west Belfast in 1971 refused to meet the Conservative MP.

“We will not meet her, and have one request for Mrs Bradley and that is for her to resign immediately,” he said.

“Families request that those parties who support our campaign join us and refuse to meet with Karen Bradley.

“Do the dignified and appropriate thing — resign, Karen Bradley.”

Frances Meehan, whose brother was shot dead by the British Army in 1980, also called for Ms Bradley to resign. “I wanted to meet her because I wanted to look her in the eye to tell her how I felt about her comments in the House of Commons,” she said. “I also wanted to say to her that on this day, International Women’s Day, that she is an insult to women. We know she has apologised but her position is completely and utterly untenable and she needs to resign.”

During the meeting Ms Bradley was shown a photograph of an 11-year-old boy in his coffin after he was shot dead by the British army. Stephen McConomy was shot and killed by a plastic bullet close to his home in Derry in 1982. Ms

Bradley was handed a number of pictures of the schoolboy including one of him wearing his school uniform two weeks before he was killed and another on a life support machine. Representatives from the campaign group said Ms

Bradley was left “speechless” at the images.

Ms Bradley made it clear on Thursday that she would not be leaving her role, vowing instead to work to deliver for people she had offended.

“I want to get on and get this job done,” she said.

Fianna Fáil has said it will not call on Ms Bradley to resign despite the “deeply inappropriate and misleading” comments. The party’s justice spokesman Jim O’Callaghan said on Friday that her “profuse” apology for the comments was sufficient but he warned she needed to be very careful about what she says in future.

“Are Fianna Fáil calling her to resign? We are not. We do recognised that what she said was completely inappropriate,” said Mr O’Callaghan.

He said it was a very difficult time for families of the victims of security forces in Northern Ireland.

“Karen Bradley’s comments were very insensitive and I think there were wrong and misleading,” he said.

“She does not inspire me or Fianna Fáil with confidence. Whether she resigns or not that is a question for prime minister May.”

The minister’s comments carried added significance as they were made a week before long-awaited decisions from Northern Ireland prosecutors on whether 17 soldiers involved in the Bloody Sunday shootings in Derry in 1972 will face prosecution.

She returned to the Commons on Wednesday afternoon in a bid to clarify the comments and, on Thursday, issued a statement of apology, saying she was “profoundly sorry”.

In an interview with the Press Association in Belfast on Thursday evening, Ms Bradley said there were “no excuses” for what she said.

“I shouldn’t have said it and I want to say sorry to all those people, all those families that have been kind enough to share their experiences with me,” she said.

“I want to say sorry to them because I didn’t want to cause hurt or pain or distress to them in any way, and what I want to do is deliver for them, and I am absolutely determined I will do.

“I recognise that a slip of the tongue at the wrong moment has caused enormous distress.

“I want to be very clear — I do not believe what I said, that is not my view.

“There is no excuse for anybody where a crime has been committed.”Additional reporting PA