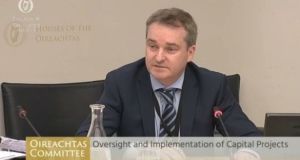 Robert Watt, the secretary general of the Department of Public Expenditure, finally appeared before the Public Accounts Committee and the Finance Committee on Thursday.

A tug of war between Oireachtas committees around who should grill one of the most senior civil servants in the country has been playing out behind the scenes for weeks as politicians tried to get to grips with the massive cost overruns at the national children’s hospital.

Robert Watt, the secretary general of the Department of Public Expenditure, finally appeared before two of the most powerful committees yesterday namely the Public Accounts Committee and the Finance Committee.

Mr Watt had previously been criticised by TDs, including the Government chief whip, for turning down a request to appear at the Oireachtas health committee to discuss the overspend.

Before he entered committee room three yesterday morning to deliver his 18-page opening statement – a statement which did not specifically mention the children’s hospital – the mood music between TDs and Mr Watt turned sour.

It was put to him that he had been heard outside the room talking about the need to “control the mob”, apparently referring to members of the PAC.

“I don’t know what I said, if I said it I apologise, I don’t actually recollect it to be honest. If anybody takes offence, I apologise. It’s, it’s a colloquial phrase. It’s not meant to be an offensive remark,” Mr Watt said.

“That is not good enough,” retorted Sinn Féin’s David Cullinane while Independent TD Catherine Connolly said it was “most unacceptable” and “offensive”. There were testy exchanges, too, over the fact that another senior civil servant had not appeared despite a request from the committee. Members of the PAC wanted to quiz the Government’s chief procurement officer Paul Quinn, who also sits on the hospital board, given the unique nature of this dual role.

Little in the way of new information was gleaned from the meeting, and little new would be learned by the day’s end. Mr Watt said he did not want to get into the who-knew-what and when, an aspect of the controversy which at one stage led to a motion of no-confidence in the Minister for Health Simon Harris.

In fact, one of the most interesting exchanges was in relation to the national broadband plan, as opposed to the national children’s hospital. Mr Watt was asked to give his view on the rising cost of that plan. He demurred. “I have views, but any comment I would make would be career ending.”

Mr Watt was at one point accused of showing disdain towards the committee, and at other points TDs questioned his body language. Catherine Connolly asked “am I distracting you from something more important” after a short silence greeted a question she had asked.

At 2:30pm, Mr Watt switched to the neighbouring room for the second round of questioning, where the mood was somewhat lighter. At one stage he joked about how he was in “good form about Man United winning last night”.

The meeting ended without incident. “We have ended the meeting without a row,” quipped the chair John McGuinness following the uneventful exchanges.