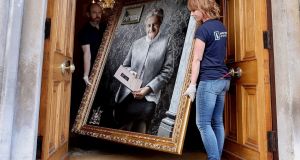 Eight new portraits of distinguished Irish women in medicine were unveiled in the Royal College of Surgeons (RCSI) board room overlooking St Stephen’s Green in Dublin on Tuesday.

It is part of the Women on Walls project at the RCSI, in partnership with Accenture and Business to Arts, a campaign that seeks to make women leaders visible through commissioned portraits.

The series is one of the largest by an Irish institution in recent years and can be seen by members of the public at scheduled times throughout 2019.

The portraits are of Dr Margaret (Pearl) Dunlevy, a woman who played a major role in the fight against TB in Ireland and died at the age of 92 in 2002; Dr Barbara Maive Stokes, a paediatrician and pioneering disability campaigner who died in 2009; Sr Dr Maura Lynch, a Medical Missionary of Mary and a surgeon who revolutionised obstetric fistula care in Uganda who died in 2017, and Dr Mary Somerville Parker Strangman a doctor and suffragist who was elected the first female councillor in Waterford. She died in 1943.

The portraits were commissioned in early 2018 and six artists were selected to paint them.

Avril Hutch, head of the Equality, Diversity and Inclusion Unit at the RCSI, said “we are doing to ensure that gender equality is very much part of RCSI” and that “Women on Walls is a campaign that started with Accenture in 2016 in the Royal Irish Academy.

“In 2018 the RCSI joined that campaign and over the past year we’ve worked with these six artists to commission eight portraits of pioneering women in healthcare.”