Comments on Troubles deaths a ‘slip of the tongue’, Bradley says

Northern Secretary criticised in North and State for saying killings by soldiers, police ‘not crimes’ 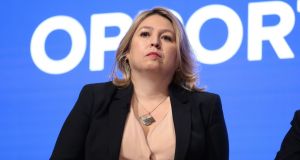 Northern Ireland Secretary Karen Bradley said she is profoundly sorry for deeply insensitive comments she made on Wednesday suggesting that deaths caused by soldiers and police during the Troubles were not crimes. Photograph: Aaron Chown/PA Wire

Northern Secretary Karen Bradley has said her description of killings by the British army and police during the Troubles as not being crimes was “a slip of the tongue”.

Speaking last nigh after a day of heavy criticism, she said she was “factually wrong” and “not what I believe”.

“It was a heat of the moment, slip of the tongue, whatever you want to call it, there is no excuses for it,” she said.

On Wednesday, Ms Bradley told the House of Commons that “over 90 per cent of the killings during the Troubles were at the hands of terrorists, every single one of those was a crime”.

She added: “The fewer than 10 per cent that were at the hands of the military and police were not crimes. They were people acting under orders and under instruction and fulfilling their duty in a dignified and appropriate way.”

Relatives of people who died in the Troubles and politicians in the North and Republic condemned her remarks.

They were seen as particularly insensitive as they came a week in advance of the North’s Public Prosecution Service (PPS) announcing whether any former British soldiers will be charged over the Bloody Sunday shootings, which led to 14 deaths.

An inquest into the 1971 Ballymurphy massacre, where British soldiers were allegedly responsible for 11 deaths, is also ongoing.

Ms Bradley said she realised the significance of the timing of her error. “I recognise that a slip of the tongue at the wrong moment has caused enormous distress. I want to be very clear – I do not believe what I said, that is not my view,” she said. “I believe that where crimes have happened, no matter who the perpetrator, they should be properly investigated by an independent authority and they should be prosecuted. There is no excuse for anybody where a crime has been committed.”

Responding to victims’ calls for her to resign, Ms Bradley added: “I want to work to rebuild their trust. I said something I shouldn’t have done. I will apologise and continue to apologise, and I will do so to people’s face and to the camera as appropriate.”

Taoiseach Leo Varadkar described Ms Bradley’s comments as “insensitive” and said her government needed to at least be “open to the possibility that these killings of civilians could have been crimes”.

PSNI Chief Constable George Hamilton said Ms Bradley needed to account for her own words, but that a police officer or soldier who shot someone should be investigated in compliance with the law.

Baroness Nuala O’Loan, the former Northern Ireland police ombudsman, wrote to prime minister Theresa May urging her to seek Ms Bradley’s resignation. It was “incomprehensible” that the Northern Secretary would have made her initial comments, she added.

When asked if she was out of her depth in the job, Ms Bradley said she had confidence in her own ability.

John Kelly, whose brother Michael was killed on Bloody Sunday, said Ms Bradley’s position was no longer tenable and that “she should go”. John Teggart, whose father Daniel was killed in the Ballymurphy shootings, also said she should resign.

The remarks also raised eyebrows in Washington DC, where Brendan Boyle, a member of Congress from Philadelphia, said the comments served “little purpose but to anger victims’ families and stoke the fires of division and misunderstanding”.

Tánaiste Simon Coveney voiced his concerns to Ms Bradley when he met her in London on Wednesday night.

He told the Dáil yesterday that he had made it clear to Ms Bradley that “no amnesties” are provided for in the Belfast Agreement.

DUP MP Sammy Wilson said British soldiers and police officers must not be above the law but that there was a “disproportionate focus” on deaths attributed to the British state.

Ulster Unionist Party MLA Doug Beattie, a former British army officer, said Ms Bradley must be aware that “she has clearly put her foot in her mouth”.