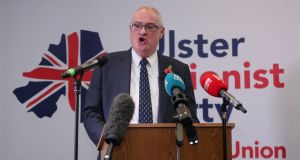 UUP leader Steve Aiken said that too often in the Brexit debate ‘it sounds like Boris bashing turns into Brit-bashing, and that is not something that I think it conducive or helpful for the people of Northern Ireland’. File photograph: Niall Carson/PA.

The North’s Assembly has passed a motion rejecting the UK government’s Internal Market Bill and any claim it is necessary to protect the Belfast Agreement.

The SDLP motion also described a trade deal between the UK and the EU as “critical in protecting the interests of everyone living in Northern Ireland”.

It was approved by the SDLP, Sinn Féin and Alliance Party, but opposed by the DUP and Ulster Unionists.

The Internal Market Bill, which is making its way through the UK House of Commons, threatens to override parts of the Northern Ireland protocol, the part of the Brexit withdrawal agreement designed to avoid a hard border on the island of Ireland. The UK government has claimed the Bill is necessary to protect peace in the North.

Proposing the motion on Tuesday, the SDLP MLA Matthew O’Toole called on assembly members to “make clear this bill does not have our consent”.

“Let us be clear that this Assembly rejects the Internal Market Bill, upholds the principles which have underpinned our institutions and affirms that commitments made in peace agreements and international treaties should not be the plaything of demagogues,” he said.

However, DUP MLA Paul Givan said his party was objecting to the motion “because it is flawed in its content”. He said that while a UK-EU trade deal was critical, there was a “huge question mark” over whether it could be sealed by January 1st.

“So what else can the government of the United Kingdom do but make preparation in the event of the European Union continuing to be intransigent, continuing to threaten and bully, but to be ready for an eventuality that doesn’t do the harm to its people, or at least mitigates that harm?”, he said.

Businesses and consumers, he said, needed certainty, and the withdrawal agreement and the Northern Ireland protocol “hands the leverage to the European Union for them to use us as a pawn in a much bigger plaything”.

The Republic of Ireland, he said, was “the predatory neighbour when it comes to commercial activities”, against which the Bill was a necessary protection.

Otherwise, he said, in regard to corporation tax and ports and airports, there would be “nothing stopping the Republic of Ireland using European institutions to frustrate those economic opportunities.”

UUP leader Steve Aiken said that too often in the Brexit debate “it sounds like Boris bashing turns into Brit-bashing, and that is not something that I think it conducive or helpful for the people of Northern Ireland.”

He proposed that MLAs write as an Assembly to the UK government and to the EU’s chief negotiator, Michel Barnier, “and say to them that we have real, significant concerns about Northern Ireland being used as a political football”.

Sinn Féin MLA Martina Anderson said the Bill was a “clear attack on our power-sharing arrangements” and a “clear attempt” to give priority to the British internal market ahead of the future priorities of the devolved administration.

While the “shameful attack by the British government has rightly been condemned around the world”, she said, “we do have another option”.

Sinn Féin, she said, “invites all those parties who are committed to the return of the North to the EU to discuss the scope for the development of an agreed position.”

Alliance MLA Stewart Dickson said it was a “matter of deep concern that legislation is being passed in our national parliament that undermines an international agreement signed less than a year ago and adds further unease about businesses and people in Northern Ireland”.