Gript site, which is backed by anti-abortion lobby, says AggregateIQ is helping to ‘profile’ readers 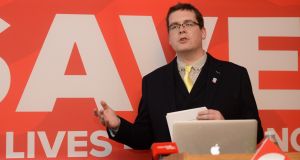 A news website established and funded by anti-abortion campaigners has struck a commercial agreement with a Canadian company found to have broken privacy laws during its work on the Brexit campaign.

The involvement of the firm, AggregateIQ (AIQ), with the Irish site, Gript, emerged after a mirror version of the Irish site was found running on an online property controlled by the Canadian company.

Gript’s editor, John McGuirk, said the firm was helping his publication attract new readers by analysing data from its current readership. “What we’re trying to do in getting as much data as possible (about readers) is profile them, figure out the common threads that bring them to us, and reach other readers and bring them to us,” he told The Irish Times.

He said none of the data on Gript users was being matched or compared with other databases. These techniques can be used to build richer profiles of internet users, which can then be used to improve targeting or extract insights on their preferences, behaviours and beliefs. Such targeting techniques were prominent - and controversial - during the Brexit referendum and the 2016 US presidential campaign.

Mr McGuirk said that while Gript was committed to user privacy, regulatory findings and investigations into AIQ were “not something that greatly concerns me”.

AIQ’s regulatory compliance was “not something that we are responsible for,” he added.

AIQ was the subject of an adverse finding by the Canadian federal privacy commissioner arising from work it did for Vote Leave during the Brexit campaign. It created advertising aimed at potential voters, and then disclosed personal information gathered by the Vote Leave group on voters to Facebook. The Canadian privacy commissioner found this “went beyond the purposes for which Vote Leave had consent to use that information”.

The firm was paid £2.7 million by Vote Leave to target ads during the Brexit campaign. The firm’s relationship with the Democratic Unionist Party (DUP) has also come under scrutiny after it emerged the party paid AIQ almost £33,000 for digital advertising in the last two days before the vote.

The firm was suspended from Facebook in 2018 following allegations that it may have “improperly received” data on the social network’s users and that it worked with a company called Strategic Communication Laboratories (SCL), which is the parent of controversial political consultancy firm Cambridge Analytica. The UK Information Commissioner’s Office found that AIQ’s actions were not in compliance with strict European data protection laws during the campaign, which the company is appealing.

Gript was founded last year as “a platform for views which challenge establishment thinking”. Its establishment was funded by the Life Institute and donations from supporters.

Mr McGuirk is a long-time anti-abortion campaigner and has worked for various other conservative causes and political parties, including Libertas, the political party founded by businessman Declan Ganley.

He said he did not believe any of the techniques being used by the company on his website “step across the regulatory line”.