Newgrange sun trap may be only 50 years old, says archaeologist

A cloudy start to the day results in merely a fleeting moment of winter solstice sunshine in Newgrange's ancient chamber. Video: Alan Betson

A stream of golden sunlight passes through the window box and along the passage way leading into the burial chamber of Newgrange during the winter solstice. Photograph: Alan Betson

Early morning visitors in the rain outside Newgrange on the morning of last year’s winter solstice, December 21st, 2015. Cloud on the horizon at sunrise blocked the sunlight from entering the chamber. Photograph: Alan Betson

Maureen Musgrave, from Co Waterford, as sunshine appear in the passage for a few moments during the winter solstice in Newgrange. Photograph: Alan Betson/The Irish Times

Trapping the winter solstice sun at Newgrange in Co Meath is not a 5,000-year-old phenomenon, but a 50-year-old “construct”, according to a former State archaeologist.

Our Stone Age ancestors were not as clever as we thought, and the significance of Newgrange as a “Hiberno-Roman” cult site in the late Iron Age has been deliberately underplayed, Michael Gibbons, co-author of a paper on the subject, argues.

Newgrange’s alignment, which captures the rising sun during the winter solstice period around December 21st, has made it one of the world’s best known megalithic tombs.

If skies are clear during sunrises from December 19th to 23rd, a narrow beam of light penetrates its “roof-box”, reaches the chamber floor and extends gradually to illuminate the entire chamber over 1 7-minute period – marking new life at the turn of the year.

However, in an article published in archaeological journal Emania, Mr Gibbons and his nephew Myles take issue with the excavation and reconstruction work carried out on the passage tomb half a century ago by the late Prof Michael O’Kelly, including the famous “roof box” for trapping the sunlight – said to be 5,000 years old.

Mr Gibbons, an independent archaeologist based in Connemara, is a former co-director of the Office of Public Works (OPW) national sites and monuments record office.

Discovery of “high value” Roman artefacts inside and outside the tomb, along with remains of dogs and horses, point to an Iron Age burial site dedicated to an “Irish elite” with links to Roman Britain, the Gibbons paper argues.

Newgrange, Co. Meath by The Discovery Programme on Sketchfab 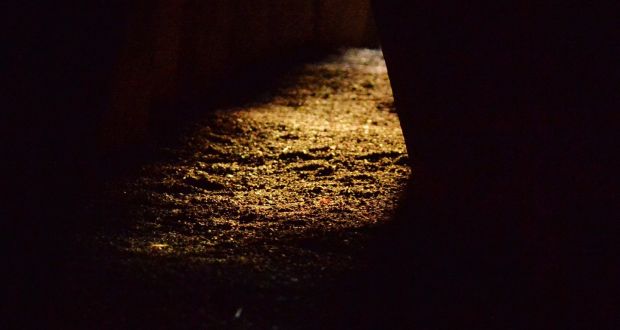 It takes issue with Prof O’Kelly’s contention that the tomb was largely unaltered from the Neolithic period, and says that Iron Age activities may have included construction of an enclosure or “barrow” on the summit and alterations to the mound’s profile.

Mr Gibbons says the “roof box” which was central to capturing the winter light has “not a shred of authenticity”, and was “fabricated” during reconstruction in the 1960s.

Newgrange has been the subject of much archaeological debate since Prof Michael O’Kelly made the first observation of the mid-winter “solstice phenomenon” at Newgrange in 1967.

Questions have been raised about the quartz wall surrounding the passage tomb, which was erected between 1967 and 1974 on the basis of Prof O’Kelly’s interpretation.

The paper by the Gibbons brothers analyses the various challenges to Prof O’Kelly’s thesis, and says Newgrange’s real significance as an Iron Age “Hiberno-Roman cult site” is supported by discoveries at the Boyne valley location which he “underplayed”.

Valuable Roman material includes coins, two gold torcs, a brooch and gold ring, pendants and a bracelet, and there was also evidence of dogs and horses, and stags or elks were uncovered from the late 17th century on.

Asked to comment, Dr Robert Hensey, author of the recently published First Light: the Origins of Newgrange, said he would agree that there was significant Iron Age activity, and said Prof O’Kelly placed “less stress” on this period.

However, Dr Hensey said it was “not correct” to state that the roof-box was a “construct”, and a series of studies indicated it was 5,000 years old.

The box’s “elevation” during reconstruction work, supervised by Prof O’Kelly, was due to the fact that orthostats or upright stones in the tomb’s outer passage required straightening, he said.

“Prof O’Kelly worked at a different time, when the criteria and guidelines we have for reconstruction did not exist,” Dr Hensey said.

“Bord Fáilte Éireann, as the tourist board was known then, gave the initial impetus for the project to attract visitors, and it has been enormously successful,” he said.

Dr Hensey will be attending the solstice at Newgrange on Wednesday on behalf of the OPW.

4 Thousands attend rallies in Irish cities in solidarity with Palestine