Changes ‘could be the difference between life and death’, city council says 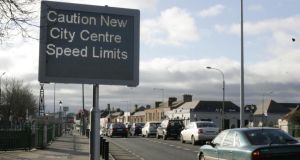 Public consultation to begin on Friday on proposals that would see 30km/h as the limit for most of the city and suburbs, with a new 40km/h limit on a number of roads on the northside of the city. File photograph: Dara Mac Dónaill

A new 40km/h speed limit is proposed to be introduced in parts of Dublin following the rejection last year of a 30km/h blanket limit by city councillors.

However, the 40km/h limits would only be permitted on certain northside roads, with most of the rest of Dublin restricted to a 30km/h limit.

Dublin City Council’s road safety section last year sought to make 30km/h the “default speed limit” across the city and suburbs, saying the lower speed would reduce fatalities and serious injuries. However, councillors voted against the new bylaws in September, following public opposition to the move.

The 30km/h default limit was not passed “due to some elected members raising different concerns including car design constraints for prolonged driving at lower speeds, delays for buses, difficulties to focus on the road while monitoring speedometer,” a report from the road safety division said. “The outcome of the related public consultation [resulting] in 56 per cent of people opposing the bylaws could also be a contributory factor to the bylaws not receiving the council’s approval.”

Motorists had complained the lower limit would cause “frustration and stress” and could result in “cyclists overtaking cars”.

Last September councillors voted by 32 to 18 in favour of a proposal from Fine Gael Cllr Naoise Ó Muirí for a revised limit of 40km/h for “specific designated roads”.

Public consultation will begin on Friday on the new proposals, which would still see 30km/h as the limit for most of the city and suburbs, with a new 40km/h limit on a number of roads on the northside of the city.

However, the bylaws going out for public consultation incorporate several other northside roads including parts of Glasnevin Avenue, Howth Road, Coolock Lane, Grace Park Road, the coastal Clontarf Road and the Causeway Road out to Bull Island.

For most of the rest of the city, 30km/h would be the limit under the proposals. A handful of major approach roads, such as the N1 and N2, would retain higher 50km/h and 60km/h limits, but as they near the city their speeds would drop to the lower 30km/h limit. A speed of 80km/h would be permitted only on a section of the Chapelizod bypass and the entry to the M1 motorway.

A 10 km/h difference in speed “could be the difference between life and death for a vulnerable road user like a pedestrian”, the council said.

“The probability that a pedestrian will be killed if hit by a motor vehicle increases dramatically with speed,” Brendan O’Brien of the council’s traffic department said.

Public submissions on the proposals can be made to the council online at dublincity.ie or by email at speedreview@dublincity.ie.