Dublin is caught short for provision of conveniences – especially for women

Up to the 1970s there were sixty staffed public toilets in Dublin. Today there are less than a handful public conveniences. Irish Times Dublin Editor Olivia Kelly reports. Video: Bryan O’Brien 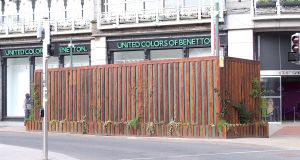 On Saturday, a friend rang from a queue for the nice public toilets on St Stephen’s Green. It took 20 minutes to get to the top of it. Photograph: Bryan O Brien

Back in December 2015 during a live TV debate for a US presidential primary before seven million viewers, the moderator was well into a question for Bernie Sanders when Hillary Clinton finally wound her way back, late, after a commercial break. “Sorry,” she said, deadpan.

Where had she been? Stuck in a queue for the ladies’ room.

Last week in Dublin city, a walker’s urgent search for a toilet forced her to call a taxi she could hardly afford to get her home, fast. On Saturday, a friend rang from a queue for the nice public toilets on St Stephen’s Green. It took 20 minutes to get to the top of it. Her male friend had breezed in and out of the men’s side in a few minutes.

Nothing about these scenarios will surprise any woman. The panic associated with an urgent need and a slow queue is a great leveller.

There are currently two public toilets available for the city of Dublin. The pubs, restaurants, hotels and department stores that normally perform this fairly heroic service by default are closed.

Even with the partial Christmas reopening and the on-street pint-drinking, customer toilets remained closed. Pause a moment and imagine the fallout.

So any plan at all for the first major rollout of public toilets across Dublin city in decades (reported here on Monday by Olivia Kelly) will get a jubilant welcome. The two current exemplars – properly staffed, clean, safe and not unsightly – cost about €182,000 a year each to staff and maintain. That tells us something about the challenges of running such a public facility.

There are two public toilets available for Dublin. The panic associated with an urgent need is a great leveller

Dublin City Council’s sustainable solution lies in a deal with coffee stand licencees. Operators could have their licence fees reduced or removed in exchange for providing and maintaining toilets for public use. While you may have to pay for the toilet use, you can probably stroll past the coffee dock without a smidgen of guilt. That’s not nothing.

The story of public toilets is not a fragrant one so an early reaction is admiration for the operators who take it on.

One thing we’ve learned is that public toilets cannot simply be installed and forgotten. Their functionality depends on staffing, on painstaking hour by hour care, maintenance and security. They come with access, parity, gender and priority issues. They are a public health facility, with particular importance for the many people with incontinence issues, a food intolerance or toddlers in a hurry.

Public toilets are also predominantly a women’s issue. That’s because women simply use toilets more frequently than men. Factor in menstruation, pregnancy, birth complications, then note that the carers with the buggies and need-to-go-NOW toddlers, the ones accompanying an elderly parent or a person with a disability tend to be women.

Yet design has never caught up with reality. Females are conditioned to toilet-queuing from birth so rarely question it. But why can’t they be more efficient about it all – like men, say?

Here’s why, with the help of a thorough toilet book, No Place to Go, by Canadian author Lezlie Lowe. Women take longer to empty their bladder. Men take, on average, 45 seconds to urinate; women 96.

Overall women take 2.3 times as long as men to use the toilet.

Add the fact that women often have to squeeze into a cubicle, close the door, try to lock it (often requiring some awkward barricading with a foot), find a non-sticky place to deposit bags or babies . . .

Women almost always use toilet paper while men at urinals rarely do (apologies to the squeamish) and, where hygiene is iffy, may hover over the seat while trying to get at the toilet paper often secured in a massive, maddening dispenser situated at a ridiculous angle and designed to release some torn fragments of a single-ply sheet per minute.

Women are also at least twice as likely to wash their hands, widely recognised as one of the great life-saving inventions in human history.

There’s more but that’s probably enough for now. In short, women require more space, time and privacy in a toilet. Yet as Caroline Criado Perez describes in Invisible Women, while we know that many more urinals can be fitted into the same space as a cubicle, male and female toilets in public buildings have been traditionally assigned the same space.

Is €182,000 a year too much for a facility key to health and wellbeing in a massive population centre and tourist city?

In the nice St Stephen’s Green facility, the two urinals and a cubicle for men seemed adequate on Saturday. The three women’s cubicles led to that 20-minute queue down the street.

There are no cheap or easy solutions to this. Is €182,000 a year too much to spend on a facility that is key to public health and wellbeing in a massive population centre and tourist city? Would 10 of them – under €2 million – be too much or a drop in the budgetary ocean?

This is about the wellbeing, dignity and reassurance of people of all ages who must carefully factor pit-stops for rest and toileting into every route or stay at home. A healthy, liveable city is about more than cycle lanes or white-water rafting for the whole and healthy.

It’s about toilets and generous seating and a generous spirit.

Public toilets are the essential business of local government.

Whether coffee dock operators should be asked to carry that burden, even temporarily, is an open question.

4 Fintan O’Toole: Prince Philip - asylum-seeker and citizen of nowhere, but rich and white