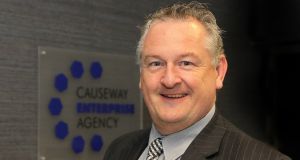 Mark McKinney: ‘My hope is that Northern Ireland has no borders’

ATG Group is a waste and environmental specialist based in Coleraine, Co Derry. It recently secured a £3.5 million (€3.9 million) contract in the Republic to dispose of contaminated dredge material in Killybegs Harbour.

It was surprise. I usually try and stay away from the politics of it and look to get on with it.

We have companies set up in every jurisdiction that we work in, including Scotland, England, Ireland and Northern Ireland. We’re looking at setting up a company in the Baltics and we’ve set up a company in Kenya. It’s in case we have trading issues in the future.

We work with different environmental agencies in each jurisdiction. The complexities are around how EU legislation is written into law in each country.

How is your company likely to be affected?

Our business in Coleraine is the administrative centre and owns all the shares in our other businesses. There are jobs in each of the markets then that we work in. We have tax liabilities and, in our sector, we have taxes that can be taken off you at source by the government. We’ve had to work on getting those reduced in Ireland, Northern Ireland and England.

Do you rely on the supply of materials across the Border?

No, when we go to work on a project, we source our materials locally. We’re fortunate that we’re project-based.

We’re looking at several new markets but we’re always doing that to check and see where the opportunities are.

Northern Ireland is going to be a special case because it is on the periphery of Europe. If we were to sever connections with England, Ireland or Europe, we could not survive.

Our biggest issue is that we don’t have a government. We had more than £1 million worth of projects that did not go ahead. They’re not being signed off by the civil servants or they’re being challenged.

We won the Transport Hub in Belfast and we’ve been asked to hold our price for eight to 10 months. We can’t go ahead with Casement Park, which is caught between judicial review and no government. There’s also the Westlink. We’re in a perfect storm at the minute between no government and Brexit.

How do you think the government has handled the Brexit negotiations?

The UK started in a bad negotiating position and Europe exploited it. The UK never had a strong position to start with because no deal was never on the table. The situation won’t change with a new prime minister. You would need someone who is extremely charismatic to bring the MPs together.

Looking ahead five years, how do you think your business or industry will have changed as a result of Brexit?

Any new European laws that are coming along in the waste and environmental sector, if they’re not implemented within Northern Ireland and England, Scotland and Wales, things will change.

My hope is that Northern Ireland has no borders. England, Scotland and Wales are trading partners of ours, but we also trade heavily in Ireland.

The worst-case scenario would be if there was a hard border or tariffs imposed for the people of the island. My best scenario would be that Northern Ireland is treated like Hong Kong and we have special relations with Ireland and with Europe – and also with England, Scotland and Wales. Northern Ireland plc doesn’t work without all of its neighbours.

I think we’re opposed to Brexit because what are the implications for the vote? In Northern Ireland, we’re so isolated, and I can understand why people voted to remain.