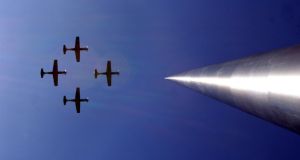 Air Corps pilots are to be sent for training with the Royal Australian Air Force under proposals approved by the Cabinet on Thursday.

The move is aimed at improving capacity for training pilots in the Air Corps, which has been affected by a shortage of experienced flying officers in recent years. The plan was put forward by the Minister of State for Defence Paul Kehoe.

Under the proposals two Air Corps pilots will be sent to Australia. It is envisaged that while there they would qualify as aircraft commanders, and that on return to Ireland they would pass on their knowledge and experience to other Air Corps officers.

The training will be followed by a 15-month placement with the Royal Australian Air Force aimed at allowing the Air Corps pilots to build up flying experience within an operational setting.

It is understood that a draft memorandum of agreement has been prepared between the Department of Defence and the Australian department of defence.

The Royal Australian Air Force will not charge the State for the cost of providing the training.

Under defence legislation the Government has to give approval before members of the permanent Defence Forces can be sent outside the State to participate in training.

The Department of Defence has indicated that such specific flight training was not available in EU countries.

The decision to send pilots to Australia for training comes at a time when the Air Corps is experiencing an increasing shortage of flying officers.

The recent Public Service Pay Commission report on the Defence Forces said 65 pilots had retired from the Air Corps between 2010 and 2018. Three of these left on age grounds.

The Air Corps has an establishment of 107 pilots. However, in reality it has fewer than 80 on duty.

“The recent departures of a number of experienced flying officers has had a real effect on the Air Corps, with the loss in specialist knowledge having an impact on the supervisory and training capabilities within the Corps.”

“There is an acute retention challenge in relation to flying officers. The commission notes that both the joint employer side and the staff associations agree that the retention issue around flying officers has reached such a point that essential services by the Air Corps are in jeopardy,” the pay commission report said.

The commission recommended the reintroduction of a loyalty bonus worth close to €20,000 for pilots to encourage them to remain in the Air Corps.