New equality initiative at UCC aims for gender ratio of 60:40 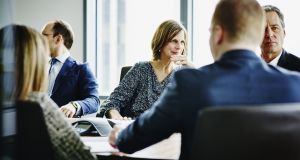 A 60:40 men to women ratio is one of the eight actions on gender equality committed to by the Cork university.

A new European Union-funded gender equality initiative at University College Cork (UCC) aims to achieve a gender ratio of 60:40, men to women, on all major decision-making bodies at the university.

UCC is one of seven universities across Europe participating in the four-year GENOVATE initiative, which is aimed at achieving equal representation of women in research and innovation across all disciplines.

Dr Caitríona Ní Laoire, School of Applied Social Studies and the GENOVATE leader at UCC, explained that achieving a minimum of 40 per cent women on all major decision-making bodies at UCC will capture “the knowledge and skills of all experienced staff, enhancing innovation and research excellence”.

“Gender equality must begin in our universities where gender parity among students is not yet reflected at senior levels of university life, limiting research and more broadly, restricting social, economic and cultural progress,” she said.

Dr Ní Laoire explained that achieving a 60:40 ratio was just one of the eight actions on gender equality committed to by UCC, each of which targets the underrepresentation of women at senior levels of university life, which is as low as 16 per cent in some areas.

GENOVATE board member and Deputy President UCC Students Union Kate Moriarty said it was critical there was a drive towards equal representation for all students in the university, as it would also have a broader impact in society generally.

“When a student sees their gender represented in their lecture theatres, they then have the ability to envision themselves in these leadership positions,” said Ms Moriarty, adding GENOVATE’s Gender Equality Plan addresses recruitment, selection, promotion, working environment and culture.

Dr Ní Laoire pointed out that to support implementation of these actions, GENOVATE has developed a number of tools, accessible through its online hub, including measures for strengthening gender balance on strategic decision-making bodies.

GENOVATE has also highlighted the potential benefit of establishing a multidimensional Equality Unit at the heart of the university to drive progress. Many of the highest ranking universities in the world have a structural focal point for equality and diversity, she said.

GENOVATE Project Coordinators Dr Sarah M Field and Nicola Maxwell said that “an accountable, accessible and well-resourced structural focal point for equality is a pivotal conduit for sustaining engagement with gender equality at every level of university life by all.”