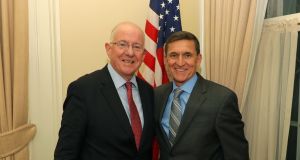 Minister for Foreign Affairs Charlie Flanagan conveyed the concern of the Irish people at Donald Trump’s immigration orders during his meeting with the US president’s national security adviser Mike Flynn.

Speaking after meeting Mr Flynn at the start of a three-day US visit, Mr Flanagan told an event at the Irish embassy in Washington that he raised the issue of Mr Trump’s temporary ban on travellers from seven majority Muslim countries and the suspension of the US refugee programme during his meeting with the Trump aide.

“Mr Flynn outlined the rationale for this order while I pointed out its damaging consequences in humanitarian terms, as well as for the international reputation of the United States, ” said Mr Flanagan.

He said he also pointed out the concern expressed across the European Union at Mr Trump’s most recent executive orders on immigration.

The White House meeting, which took place shortly after Mr Flanagan arrived in the US on Tuesday , marked the first first-to-face interaction between a member of the Irish Government and the Trump administration since the New York property tycoon took office almost two weeks ago.

Mr Flanagan told a meeting of the Irish Network DC that during his discussion with Mr Flynn he had “the opportunity of sensitizing General Flynn on our continuing concerns in regard to the undocumented Irish community and our hope that this issue can be addressed by the new administration and Congress. ”

Days before the travel ban on refugees and citizens of certain Muslim countries was introduced, Mr Trump signed an executive order aimed at cracking down on undocumented immigrants, targeting those who have committed crimes in the first instance. The lack of clarity around the Trump administration’s plans for the remaining undocumented has raised concerns, particularly in light of last weekend’s extreme travel ban.

Both are members of Mr Trump’s national security council which was involved in drafting Friday’s order targeting the seven Muslim nations that caused chaos at major American airports and led to the detention of legal US residents and visa holders, mass demonstrations and international criticism.

He has referred to Islam as “a cancer,” claimed that a “fear of Muslims is rational” and pushed a conspiracy theory that Sharia or Islamic law is spreading throughout the United States.

Mr Flanagan’s first meeting in Washington illustrated the competing challenges the Government must juggle: heeding public criticism at home at meeting senior Trump aides in light of the president’s contentious policies while at the same time raising concerns with US government officials over the extreme measures.

The Minister told his Irish audience that the Government could only achieve relief for undocumented Irish immigrants and push for legislation for a pathway to legal immigration “if we engage and if we build relationships with the key decision makers in the administration.”

“In the long history of friendship between our two countries, we have always had the capacity, when needed, to speak frankly to one another,” Mr Flanagan said.

In a thinly veiled reference to the anti-trade, protectionist policies of the new US administration, Mr Flanagan said that the Irish Government was “not blind to the downside of globalisation.”

“But as a small, open, export-driven economy, we have seen first-hand the enormous benefits that the remove of trade barriers and reciprocal foreign direct investment can bring,” he said after referring to US companies employing more than 100,000 in Ireland and the tens of thousands employed by Irish firms in the US.

Mr Flanagan was expected to have a number of meetings on Capitol Hill on Wednesday, including with high-ranking Republicans - Speaker of the House of Representatives Paul Ryan and House majority leader Kevin McCarthy, who will play a pivotal role in driving Mr Trump’s policy agenda on Capitol Hill. He was also set to meet senior Democrats including the party’s minority leader in the House, Nancy Pelosi.

On Wednesday, Mr Flanagan said: “I was pleased to meet senior politicians from both sides of Capitol Hill for discussions on Northern Ireland, Brexit, economic issues and immigration reform.

“It was also an opportunity to hear the views of speaker Paul Ryan, House majority leader Kevin McCarthy and house minority leader Nancy Pelosi on the new legislative agenda.

“I am heartened by the continued strong interest in Ireland from influential politicians in the US Congress including congressman Richie Neal and Joe Crowley and to see that many retain their engagement when they leave political office including former congressman Bruce Morrison and Jim Walsh who I also met today.”

Destitute in Dublin: ‘You are vulnerable in a tent. Nowhere is safe’ 18:43
Dublin homes within walking distance of park are worth more, conference told 18:08
Man who denies murdering he father says he was his mate 18:07
Court hopes to make final ruling on McNamara and Lowe insolvency arrangement 17:49
Varadkar offers Drogheda gardaí additional resources 17:48
SUBSCRIBER ONLY