Former host of 'The Daily Show' Jon Stewart returns to US television as a guest on 'The Late Show with Stephen Colbert' to satirise Donald Trump. Video: CBS 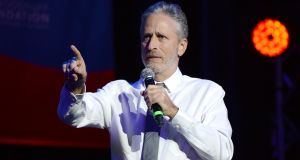 Jon Stewart performing at Madison Square Garden last November. On Tuesday’s Late Show he read out a series of Trump executive orders. “The reason that I, Donald J Trump, am exhausting is that every instinct and fibre of my pathological self-regard calls me to abusive power.” Photograph: Kevin Mazur/Getty Images

Wearing a furry animal atop his head and a red tie that stretched down below his feet, Jon Stewart returned to the Late Show on CBS on Tuesday and resumed his occasional role as a thorn in the side of President Donald Trump while offering wry complaints to the host, Stephen Colbert, about life since election day.

“I love your outfit,” Colbert said as Stewart sat down next to his desk. “Is this your Donald Trump impression?” After giving a quizzical stare, Stewart replied: “I thought this is how men dressed now. The president sets men’s fashion, and I saw the inauguration. Super long tie, dead animal on head. Boom.”

The bulk of Stewart’s appearance was devoted to his recitation, in a wilfully half-hearted Trump accent, of several new executive orders, the president’s preferred style of leadership thus far. The first order: “To secure our border, China shall immediately, and without hesitation, send us their wall. Done. Boom.”

To get Mexico to pay for it, “when the wall arrives at the southern border, we shut the lights; we pretend we’re not home,” Stewart said. “It’s COD; Mexico has to sign for it.” He also announced: “America now finally has an official language. The new official language of the United States is” baloney. (Stewart used a far stronger word beginning with “b”.)

Stewart then read a third executive order of greater length:

The President is here. #LSSC pic.twitter.com/XzXO09ALBM

"The Presidency is supposed to age the President, not the public" #LSSC pic.twitter.com/tpB6m8AJWD

The President has spoken #LSSC pic.twitter.com/b9pq428zsh

“I, Donald J Trump, am exhausting. It has been 11 days, Stephen. 11 [expletive] days. Eleven. The presidency is supposed to age the president, not the public. The reason that I, Donald J Trump, am exhausting is that every instinct and fibre of my pathological self-regard calls me to abusive power. I want – no, deserve – not just your respect but your adoration. Parades with the tanks and the synchronised dancing, and why can’t they train 10,000 doves to spell out ‘Trump’ in the clouds? How hard can it be? They’re already flying.

“I, Donald J. Trump, am exhausting because it is going to take relentless stamina, vigilance and every institutional check and balance this great country can muster to keep me, Donald J Trump, from going full Palpatine, with the lightning coming out of the fingertips and ‘fear leads to anger, anger leads to hate.’

“We have never faced this before. Purposeful, vindictive chaos. But perhaps therein lies the saving grace of my, Donald J. Trump’s, presidency. No one action will be adequate. All actions will be necessary. And if we do not allow Donald Trump to exhaust our fight and somehow come through this presidency calamity-less and constitutionally partially intact, then I, Donald J. Trump, will have demonstrated the greatness of America. Just not the way I thought I was gonna.”

Stewart, who is an executive producer on The Late Show, most notably popped up on the programme during live episodes that were broadcast in July after the Republican National Convention. A comedy sketch revealed that he had been living in a cabin with Colbert’s conservative alter ego throughout the 2016 election campaign, unaware that Trump had clinched the Republican presidential nomination.

And in a lengthy, passionate, desk-side monologue, Stewart had gone after Fox News and its hosts like Sean Hannity, who he felt had been too deferential to Trump during the campaign. “You feel that you’re this country’s rightful owners,” Stewart said in the monologue. “There’s only one problem with that. This country isn’t yours. You don’t own it. It never was.”

Trump, while still in civilian life, had been a frequent target of Stewart’s Daily Show, for pushing birtherism, among various opinions he espoused in cable news interviews. Trump hit back from time to time on his Twitter account – of course – writing messages like “I promise you that I’m much smarter than Jonathan Leibowitz – I mean Jon Stewart @TheDailyShow. Who, by the way, is totally overrated.”

In a CBS interview shortly after the presidential election, Stewart said that Trump was “not a Republican” but a “repudiation of Republicans”. “But they will reap the benefit of his victory,” Stewart said. “In all of their cynicism, I will guarantee you Republicans are going to come to Jesus now about the power of government.”