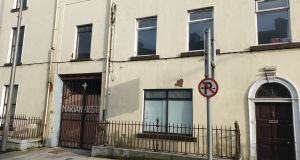 The Marian Hostel was opened in 1954 by the Sisters of the Blessed Sacrament to provide accommodation for young working women.

A former hostel run by nuns in Tullamore town centre, Co Offaly is to be used to house up to 168 asylum seekers.

The Department of Justice confirmed on Tuesday evening that a contract has been signed for the use of the building on High Street in the town and it it due to open in early March.

The Marian Hostel was opened in 1954 by the Sisters of the Blessed Sacrament to provide accommodation for young working women.

It closed in 2015 and was sold to a private buyer. At the time of its sale it had 35 bedrooms and 20 bathrooms.

The Department said that in line with the new standards for direct provision being rolled out across the State, the centre would provide “independent living” facilities to residents.

“We want to provide the local community with as much information as possible. A meeting has been arranged between Department officials and local representatives from the Tullamore Municipal District in the coming days to discuss what supports will be in place to facilitate the new accommodation centre and its residents.

“In line with successful models around the country, a ‘Friends of the Centre’ group will be established,” a spokesman for the Department said.

The centre will be managed by Bridgestock Care, a service provider with “many years’ experience providing services to asylum seekers in Ireland”, according to the Department, including the recently opened centre in Ennis.

A number of families will move to Tullamore “in the coming weeks”. The plan is that those seeking international protection will come to Tullamore on a phased basis.

Residents will have their own cooking facilities and an onsite food hall where they can get groceries.

“This is in addition to the weekly cash allowance residents receive (€38.80 for adults and €29.80 for children), which they can spend wherever they choose. Applicants can also access a range of State services and supports including healthcare, education, childcare etc., on the same basis as everyone else,” the Department spokesman said.

Local sources have been saying for months that a direct provision centre would be provided at the Marian Hostel. Independent Cllr Sean O’Brien claimed on Tuesday it had been “foisted on the people of Tullamore without an ounce of consultation”.

“I do not have a problem with assisting refugees as they have been through a horrific experience and need help. But the Government should have called meetings and explained what was proposed and listened to local concerns,” he said.

“My main concern is that there seems to be plenty of resources for these centres but there is nothing for the hundreds of local people who are looking for a place to stay and a home.”

He said: “People locally who are homeless are being told to go to centres in Athlone and Longford.”

“Questions were asked about Government plans for a refugee centre but no answers were given, yet these plans were being being nurtured in the background. I got a call from Minister [for Justice Charilie] Flanagan’s office today to state that the contract had been signed for this centre in Tullamore. I have to suspect that this announcement was delayed until after the recent election.”