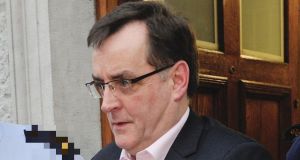 A former Christian Brother has been jailed for 12 months for sexually assaulting a 14-year-old boy at the North Monastery secondary school in Cork after inviting him to attend a basketball training session in the sports hall.

Edward Bryan (67) with an address at Dugort, Achill Island, Co Mayo had pleaded guilty earlier this month at Cork Circuit Criminal Court to indecently assaulting the boy at the North Monastery between November 1st and December 31st 1981.

Det Garda Eimear Brennan today told how Bryan had approached the boy when he was playing a hurling match at the school, remarked on how fit he looked and invited him to a basketball training session but the boy said his gear was muddy and he had no other gear.

Bryan said he had some spare clothing and persuaded the boy to attend at the sports hall but when the boy showed up, he was surprised to discover he was there on his own and when Bryan arrived, he gave him a large tracksuit pants and then watched him change into them.

Bryan told the boy to start doing press-ups and as he did, Bryan climbed on to his back and pulled down his pants and he could feel Bryan’s erect penis touch his cheeks so he told Bryan to get off which he did and he left the room and did not come back.

Det Garda Brennan said that Bryan made no admissions when he was first arrested in March 2018 and interviewed about the sexual assault but he did plead guilty when he was arraigned on the charge earlier this month. He also had nine previous convictions for indecent assault, she said.

The complainant told in a Victim Impact Statement how his life changed when he sexually assaulted by Bryan as he recalled how failed his Intermediate Certificate as he froze with fear and nervousness when sitting the exam in the same hall where Bryan had sexually assaulted him.

“Every day after that [the sexual assault], I was a nervous wreck at school. I worried what if Brother Bryan would ever become my teacher. Would I have to face him again? The rest of my time in the North Mon went with worry and fear, not listening in class and not learning anything from there on.”

He never told anyone about the abuse until he met his partner who later became his wife and confided in her and she listened quietly and comforted him when he got upset and she remains the only one outside of health professionals and gardaí that he has ever told about the sexual assault.

“I am not here today in vindictiveness but I want Brother Bryan to know and hear how he destroyed my life . . . I am finally believed and I have spoken the truth and the dirty secret I have carried for years is no longer mine to carry,” he told the court.

Defence barrister, Brendan Kelly BL said that his client was genuinely remorseful and he read out a letter of apology from Bryan to his victim before pleading for leniency and pointing out that his client had spared the complainant the trauma of a trial by his guilty plea.

Judge Brian O’Callaghan said that any sentence must be proportionate to the gravity of the offence including, not just the harm that Bryan had caused but also his “moral culpability in committing these vile acts” on a 14-year-old boy.

“Although this offence happened a long time ago and such offences are often described as historical, they are by no means historical with the impact of these offences continuing every day of the week on the victim until they are addressed in a forum like this,” he said.

Judge O’Callaghan acknowledged that Bryan had spared his victim the burden of a trial and that was a mitigating factor as was the fact that he had not come to the attention of the gardaí since they investigated the other assault cases which dated from the 1980s.

“The court cannot ignore the age of the victim and the serious breach of trust, the devastating effect of your actions on this young man,” said Judge O’Callaghan as he sentenced Bryan to two years in jail but suspended the final 12 months.