Covid-19 a greater menace to the elderly and vulnerable 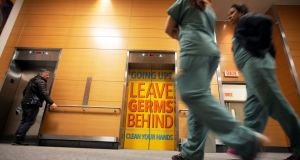 The advice for the public, for example, is to wash your hands regularly and practise good sneezing etiquette. Photograph: Reuters

These are worrying times, given the spread of the coronavirus, but especially so for people with underlying health conditions, older people and their families.

By now most people know Covid-19, as the disease is known, strikes older and vulnerable people harder than most.

One study of 45,000 early cases in China showed an overall death rate of 1 per cent, but this rose to 6 per cent for people with cancer, high blood pressure and chronic respiratory disease, 7.3 per cent for those with diabetes and 10.5 per cent with heart disease.

There was also a steep age gradient; there were no deaths in the newborn to nine-year-old category, but the death rate among those aged over 80 was almost 15 per cent.

These are still early days in terms of our knowledge of this virus, and these figures have to be approached with caution. Health systems vary from country to country, as does recording of data, and there may be factors particular to China that do not apply in Europe – smoking rates, for example, or air quality.

However, the opportunistic nature of the disease is already evident in the stories emerging from outbreaks in western countries. It emerged in the UK at the weekend, for example, that one of the new coronavirus cases there occurred in a cancer centre. In the US, a serious outbreak near Seattle has occurred in a nursing home. Obviously, the risk of something similar happening in Ireland is a huge worry.

At-risk groups already suffer disproportionately from the seasonal flu. This winter, it was apparent from the graphs that young children, off school over Christmas, played a major role in passing on the flu to older relatives, whose admissions to hospital then peaked in the weeks that followed.

The HSE in its general advice says we do not know for sure which groups are most at risk of complications if they catch coronavirus, but it adds that you are more likely to be at risk if you catch the disease and are 65 years and over, have a long-term medical condition, such as heart disease, lung disease, diabetes or liver disease.

It does not offer advice specific to these vulnerable groups other than the general hygiene, travel and social distancing advice applicable to us all.

Oncologist Prof John Crown has highlighted the potential exposure of cancer patients, who he says should stay away from situations of risk and ensure those around them do likewise. He had also counselled cancer patients to “give a second thought” about travelling to areas where the virus is present.

Can it be contained?

Like other doctors, Prof Crown is concerned about a shortage of intensive care beds in the Irish system should a large number of cases occur. However, as he points out, by acting now to delay the arrival of new cases and minimise the spread of existing ones, we can “flatten the curve” and so successfully contain its spread.

Nursing Homes Ireland, representing the owners of private nursing homes, has sought to reassure the public that its members have the experience to know what to do if the virus arrives, given their experience in dealing with seasonal flu and the vomiting bug.

Some restrictions on visiting may be needed if the threat from the virus rises.

Meanwhile, cystic fibrosis (CF) patients have also been expressing concern about the developing situation. CF Ireland has written to the chief medical officer and is seeking a meeting with senior health officials over its concerns, it said on Monday.

The charity believes not enough information for at-risk groups has been provided for people with CF and other lung diseases.

Minister for Health Simon Harris indicated on Monday that he plans to organise a briefing session for at-risk groups on the coronavirus.

For now, the advice from the Minister to these groups remains the same as for the rest of the population – for example, to wash your hands regularly and practise good sneezing etiquette.

Common sense suggests those affected should also practise social distancing and avoid travelling to places where the virus is circulating.

Reducing social distancing to 1m ‘could double risk’ of infection

1 Luke ‘Ming’ Flanagan bares his bottom half to European Parliament
2 Trump turns to bible for photo op as DC burns around him
3 Coronavirus: Public urged to stick with ‘tough’ restrictions to allow phase two proceed next week
4 Covid-19: Easing of restrictions ‘unlikely’ to be speeded up
5 ‘Frustrated and angry’: Thousands march in Dublin to protest death of George Floyd
Real news has value SUBSCRIBE