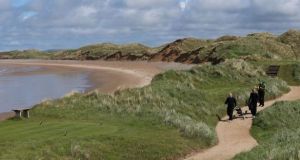 A new campaign has begun against a proposal by US presidential candidate Donald Trump to build a 3kms wall along a public beach to protect his golf resort at Doonbeg.

Tony Lowes of Friends of the Irish Environment said #NatureTrumpsWalls is an international campaign aimed at preventing Mr Trump from building the controversial wall that would limit access to Doughmore Beach in Co Clare and “destroy the pristine dune ecosystem”.

The campaigners are urging Clare County Council to reject the proposal.

Mr Lowes said the campaign is being run in co-operation with Save the Waves, an international organization to works to protect coastal ecosystems around the world.

“Save the Waves work in partnership with local communities, organizations, governments, and businesses to ensure that coastlines are cherished and protected.

“We are delighted that they are bringing the threat to one of our finest dune systems to worldwide attention,” he said.

Mr Lowes said Mr Trump and his hotel company, Trump International Golf Links (TIGL) wanted to build a wall at Doughmore Beach that would run for 2.8 kilometres long, reach 4.5 metres in height and be built from 200,000 tonnes of rock dumped in a sensitive coastal sand dune system.

Mr Lowes said Doughmore Beach was a popular surfing spot and the seawall would “destroy the sand dune habitat, restrict public access, negatively impact the quality of the surfing waves, and ultimately result in beach loss”.

The golf course is built along a picturesque sand dune system known as Carrowmore Dunes and covers 31 acres. The area has been designated as a ‘Special Area of Conservation’ by the European Union Special Habitats Directive.

According to Mr Lowes, Mr Trump began to dump boulders along the public beach at Doughmore following a series of winter storms in February 2013 without any permits before Clare County Council intervened and forced him to stop the work.

Mr Lowes said Mr Trump had become frustrated that he needs to comply with local planning regulations and has threatened to close the golf resort if his permit is not approved. He sought special permission from the Government for the wall in March but this was rejected.

“Clare County Council is now the responsible agency deciding the fate of Doughmore Beach. They have reviewed Trump’s permit application and Environmental Impact Statement and have sent a Request for Further Information outlining 51 specific points that they want resolved or clarified.”

However, many residents of Doonbeg support Mr Trump’s plan for a wall with 76 of the 112 submissions made to the council on the issue; including 36 from locals, 15 from golf club members and 14 from non-locals, backing the proposal.

Some 32 people from other parts of Clare as well as elsewhere in Ireland have objected and these include objections from the Irish Surfing Association, the West Coast Surf Club based in Lahinch, Friends of the Irish Environment and the recently-formed Save Doughmore Beach Protection Group.

A submission also came from Doonbeg Community Development Company, which represents the interests of the community and was instrumental in having the golf resort established in the late 1990s strongly backed Mr Trump in his plan to protect the golf course.

“If the sea manages to breach the dunes at any of the vulnerable points, a huge amount of flooding is going to occur to the land adjacent to the dunes and is going to have a detrimental effect on the livelihoods of the householders and farming communities in the area,” said the group.