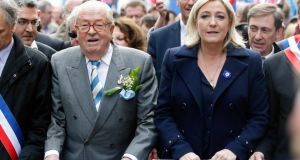 Marine Le Pen is the new Joan of Arc, who will expel the EU from France, just as the Maid of Orléans threw the English out in the 15th century.

“Jeanne d’Arc received a mission to liberate France from English occupation,” said Jean-Marie Le Pen, the ageing founder of the right-wing National Front (FN), introducing his daughter and successor. “Marine is here to liberate France from the yoke of Brussels. France has been reduced to servitude by the betrayal of her elites.”

The photographic backdrop to the stage on the Place de l’Opéra showed a woman in chain mail and helmet, blowing yellow stars off the blue EU flag. “No to Brussels. Yes to France,” it said in big letters.

The FN has celebrated May 1st as a joint tribute to French workers and St Joan, symbol of French nationalism, for the past 25 years.

There was new energy in yesterday’s march, thanks to the party’s strong showing in recent municipal elections, when it won 11 towns and cities and 1,500 council seats. Polls show the FN could win close to a third of 74 French seats in European parliamentary elections on May 25th.

The FN’s strategy for the EU elections “is to explain that if you’re against the EU and for France, you have to vote FN”, said Florian Philippot, an adviser to Le Pen.

FN leaders railed against two particular EU measures: the “posted workers directive” which allows workers from poor EU countries to work in France for the wages they would earn at home, and negotiations with the US for a transatlantic trade agreement.

“Europe puts tens of thousands of French people out of work every year with this directive,” said Steeve Briois, mayor of the northern town of Hénin-Beaumont. Briois was fêted like a hero for winning the mayor’s office in the first round of the March local elections.

Road transport has been particularly hard-hit by competition under the directive. “When I stop in the service area on the autoroute, there are lorries from every country except France,” Briois continued. “We must stop Europe deregulating labour . . . France shouldn’t snap to attention before the EU Commission.”

Marine Le Pen mocked the leaders of the socialist and conservative UMP parties – which she lumps together as the “UMPS”. The people of France “are a people of lions, when they are not governed by donkeys”, she said.

Le Pen borrowed one of her father’s old images, of France reduced to the status of a region “in the magma of Europe”. When Nicolas Sarkozy was in power, the UMP “wallowed in submission to Brussels and Germany,” she continued. The socialist ministers of finance and the economy “crawled on the ground” during a recent journey to Berlin.

“If you don’t vote on May 25th, you allow the gravediggers of France to continue their sinister undertaking,” Le Pen warned. “The French people no longer control anything – not their budget, currency, defence, banks or borders. We urgently need to become masters in our own house.”

Europe “sends your jobs to Romania, where they pay €300 a month”, Le Pen said. “Europe gambles with your savings. Under a new directive, French banks are no longer controlled by Frenchmen.”

The trade agreement with the US is negotiated “in total opacity” and will force the French to eat genetically modified organisms, cloned animals and chicken soaked in bleach, she warned.

A man who drove from Belgium waved the yellow flag emblazoned with the lion of far right Flemish party Vlaams Belang. If Eurosceptic parties from seven countries win at least 25 seats, Le Pen intends to form a parliamentary group in Strasbourg. “Marine is the strongest, most active leader,” he said. “France, Belgium, Holland and Austria all want to regain their independence.”