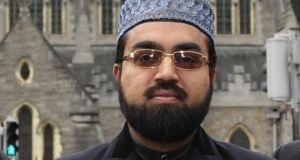 “I am not in favour of banning foreign preachers but I am in favour of being very careful about bringing foreign speakers to speak to Muslims in Ireland,” said Shaykh Dr Umar Al Qadri (pictured). Photograph: Aidan Crawley

A Muslim cleric has called on all foreign Muslim scholars visiting Ireland to sign a declaration condemning extremism before they are allowed to preach at mosques in the State.

The call from Shaykh Dr Umar Al Qadri comes ahead of two radical preachers coming to Dublin to speak at the weekend.

He said he was not aware of the planned visit by Dr Othman Al Khamees and Dr Khaled Al Otaibi until contacted by The Irish Times but said allowing the two clerics preach a radical form of Islam would not help integration in Ireland.

“I am not in favour of banning foreign preachers but I am in favour of being very careful about bringing foreign speakers to speak to Muslims in Ireland,” said Dr Al Qadri, who is the Imam of the Al-Mustafa Mosque in Blanchardstown and chair of the Irish Muslim Peace and Integration Council.

Dr Al Qadri made his comments after it emerged that Dr Al Khamees and Dr Al Otaibi are due to address the Dublin Islamic Conference 2016. The conference is being organised by a Kuwaiti student group at the Dublin Mosque on the South Circular Road on Friday and Saturday.

“I believe foreign speakers should be asked to sign a statement in which they condemn Osama bin Laden, ISIS and all extremist militants, call for tolerance and respect for all people including the LGBT community, respect democracy and the permissibility to vote in western countries,” he said.

“My concern would be that such people and their ideas radicalises young Muslims. It’s not helpful for the integration of Muslims in this country when foreign speakers espouse positions that the vast majority of Muslims do not share but because they are in a position of trust, they can incite hatred.”

Dr Al Qadri said according to the poster of the event, Dr Al Khamees will hold a fatwa session where he will give legal opinions on questions from the audience and he feared young Muslims would treat his opinions as legally binding when he has no experience of living in Ireland.

“He could be asked all type of questions in regards to living as a Muslim in the West. This could range from religious affairs to political affairs such as democracy, engagement with non-Muslims, homosexuality and people will expect and assume the verdicts he will give are binding on them,” he said.

“The worrying aspect from an Islamic point of view is that neither of these persons is an Islamic scholar living in Ireland and therefore they are not eligible to give a fatwa to Muslims in Ireland because they live in Kuwait and don’t know the circumstances of Muslims in this country.”

Dr Al Qadri said that both Kuwaiti clerics, while not well known globally, preached a sectarian form of Islam, Wahhabism, which is intolerant of other religions such as Christianity and Judaism as well as of other Muslims such as Shia or Sufi Sunnis.

“They don’t believe in democracy and to them, Osama Bin Laden is a hero. . . Dr Al Khamees is very outspoken against Shia Muslims, not just highlighting the difference in theology, but speaking of them in a very insulting and derogatory and sectarian manner,” he said.