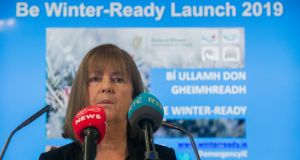 Evelyn Cusack, head of forecasting at Met Éireann said the latest spell of wet weather follows on from the 50mm of rain which fell over the weekend. Photograph: Gareth Chaney/Collins

Another rainfall weather warning has been issued for eastern counties with the danger of spot flooding in places.

The yellow weather warning is in place for the counties of Dublin, Kildare, Louth, Wicklow and Meath from 6pm on Wednesday evening to Thursday at 9pm.

Speaking at the launch of the Government’s “be winter-ready” campaign, Met Éireann head of forecasting Evelyn Cusack said the latest spell of wet weather follows on from the 50mm of rain which fell in the same region over the weekend.

Farmers are suffering from the impact of a very wet autumn, with the potato, carrot and parsnip harvest behind schedule, while the planting of winter barley and wheat has also been severely curtailed.

Ms Cusack acknowledged there was a possibility that the public was getting “yellow fatigue” from a succession of weather warnings.

As part of the winter-ready campaign, Met Éireann is issuing leaflets explaining the three weather warnings. Status yellow is for weather which is not life-threatening but is potentially dangerous on a localised scale. Status orange is where there is a threat to life and property and people should think twice about venturing out. A status red warning is for people to stay indoors and not go out in any circumstances.

Long-term seasonal forecasting is difficult, but the European Centre for Medium Wave Forecasts (ECMWF) predicts that the next week will be showery and the weather will get slightly colder after that for the rest of November.

At the launch of the winter-ready campaign, the Minister for Transport Shane Ross said 217,000 tonnes of salt is being made available to local authorities – more than the 200,000 tonnes of salt used across Irish roads during the severe winter of 2017/2018 in which the so-called Beast from the East brought the country to a standstill for a few days.

The Department of Housing, Planning and Local Government is working with the Dublin Region Homeless Executive to provide 300 additional beds this winter with the majority being in place before Christmas. There will also be 50 contingency beds available in the case of emergency.

Tom McGuinness from the HSE National Office for Emergency Management said the pressure on accident and emergency services during the winter months is the subject of a targeted plan within the HSE which is in the final stages of preparation.

The Minister for Health Simon Harris has been briefed on the contents of it and there will be funding made available for home care and home help packages.

“There is a financial package to be made available to target specific elements within the area of health that will allow the pressures within the acute hospital system to be addressed,” Mr McGuinness added.