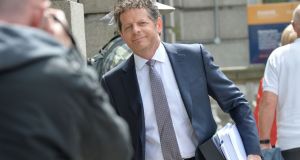 John Moran: Local authorities must ‘get out of this concept’ that building more roads will solve their problems. Photograph: Alan Betson / The Irish Times

The interim chairman of the Land Development Agency, John Moran has criticised local authorities for failing to draw down hundreds of millions of euro, made available to help tackle the housing crisis.

Mr Moran said a Government fund designed to promote urban regeneration and boost development has had a very low uptake – just five per cent of the €2 billion Urban Regeneration and Development Fund was successfully applied for last year.

He told RTÉ radio’s Morning Ireland that Waterford was the only city in Ireland where a person on the average industrial wage could afford to rent a one-bedroom apartment.

The fund is a key part of Project Ireland 2040 (the Government’s National Planning Framework and National Development Plan),which was designed to address issues such as unaffordable rent, security of tenure and long commutes, he said. The fund is aimed at towns and cities outside of Dublin to “change the way they operate to become more attractive,” he added.

Local authorities must “get out of this concept” that building more roads will solve their problems.

“The way that the country needs to develop is that we will have little neighbourhoods, almost like little towns within our cities, where people walk, hop on a bike, an electric scooter.

“So we have to get out of this concept that building more roads will solve the problems we have.”

Mr Moran said, “If you do not ask for the money, you cannot get it,” and he urged local authorities to “get those plans together now.”

“We’re talking about cities like Limerick which is 100,000 people growing to 150,000 people in, effectively, 20 years. That’s not going to happen in the 18th, 19th or 20th year, it has to happen quickly and it has to be planned for so that it works across all the agencies, like education, transport, housing or water.”

This is “absolutely critical” for the work of the Land Development Agency, he explained. The agency is supposed to be “catalysing” about 7,500 homes a year until 2040, but it cannot do that with “different isolated sites”.

“Large tracts of a hundred acres” in downtown areas in towns will be required so the agency can plan and develop, he said.