Almost 103,000 people have been waiting more than 18 months for a slot 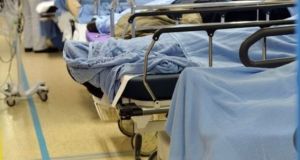 In a statement, the NTPF said it will maintain focus on ‘improving waiting times for inpatient and day case treatment, while also significantly increasing its focus on outpatients’. File photograph: Alan Betson

The number of people on hospital waiting lists rose slightly in January, marking a reversal of recent declines driven by increased government spending on the National Treatment Purchase Fund (NTPF).

Figures published today show that there were small relative increases in both inpatient and outpatient waiting lists.

There were some 556,770 people on the outpatient waiting list in January than December, an increase of 3,336 in December. On the inpatient/day case list, the number climbed by 740 cases to 67,303.

There was a relatively larger increase in the number of people on waiting lists who have been given a scheduled date for their admission. This number rose to 20,033, an increase of 2,822, or 16.4 per cent.

Overall, there are 677,344 cases on waiting lists, up from 671,489 in December. The figures outpatient waiting lists, in particular, recorded significant reductions at the tail end of last year, with the fall of 10,000 in December the largest single-month drop seen in several years.

The fall in outpatient numbers was widely seen as being driven by massive government investment in the NTPF, which provides for the purchase of treatment for public patients, often in private clinics. The NTPF has been allocated € 100 million in budget 2020, up €25 million on the previous year’s allocation. In a statement, the NTPF said it will maintain focus on “improving waiting times for inpatient and day case treatment, while also significantly increasing its focus on outpatients”.

Falls in waiting lists last year also prompted increased scrutiny of how hospitals carry out “validation”, the process of checking whether a patient still needs to be on a waiting list. This can result in someone being taken off a waiting list if they have received treatment elsewhere, or if they do not respond to attempts to contact them. While this is a necessary process, some doctors’ groups have, in the past accused hospital groups of “cynical manipulation”.

The NTPF recently was given responsibility for validations. Figures revealed by The Irish Times show that there was a significant increase in validations in the second half of last year, with around 75,000 outpatients validated in the last three months of 2019, compared to none in the first nine months of 2018. Of the 45,270 patients removed from the outpatient list, a majority were taken off following non-response rather than asking to be removed.

Fianna Fáil Health spokesman Stephen Donnelly said the increase in waiting lists in January was “disappointing”. He said it was “clearly a consequence of scheduled operations being postponed to address the January overcrowding in emergency departments”.

“However Minister Harris also missed his waiting list targets in 2019. It’s important now that a waiting list action plan for 2020 be published urgently by the Department of Health. ”

1 ‘Everyone still thinks it’s a joke’ - parents of toddler with coronavirus speak out
2 Miriam Lord: You cannot cocoon democracy – or can you?
3 Ireland has strategy to ‘break the chains’ of coronavirus - WHO’s Mike Ryan
4 UK makes another coronavirus U-turn but doubts over strategy linger
5 Varadkar: Decision next week on relaxing coronavirus restrictions
Real news has value SUBSCRIBE