Stripe co-founders donate €100,000 to children’s charities in Ireland during appeal 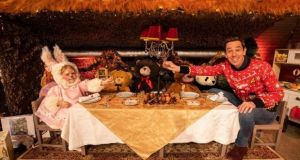 More than €6 million was raised for children’s charities during the RTÉ Late Late Toy show on Friday night.

By midnight on Friday more than €5.2 million had been raised for children’s charities with donations still flooding in into the early hours of Saturday morning. However, by 6pm on Saturday, this had climbed to €6 million, RTÉ said.

Tubridy announced that the children of Ireland had inspired RTÉ to follow their lead by setting up the first Toy Show appeal, with the support of the Irish Community Foundation.

The high volume of donations which immediately followed the RTÉ callout resulted in the Stripe online payments platform temporarily failing to processing all the money coming in. Members of the public posted on Twitter that they were struggling to process their donations to the appeal and called on Stripe to increase its donations rate.

Collison, tweeting at RTÉ, shortly after 11pm on Friday said that the Stripe team had “just 5x’d the capacity for the RTÉ Toy Show Appeal. We aren’t seeing any issues right now.”

Shortly before midnight, Collison added that he and his younger brother John would “personally donate” €100,000 to the appeal.

Friday’s Toy Show was watched by an audience across 110 countries worldwide. All funds donated during the show will be distributed by The Community Foundation for Ireland 2021, said RTÉ.

Half the donations will be shared between Barnardos, Children’s Health Foundation and Children’s Books Ireland, while the remaining 50 per cent will be distributed as grants by Community Foundation for Ireland to charities supporting children across Ireland, said the national broadcaster shortly after midnight on Friday.

The RTÉ Toy Show appeal will remain open for donations for the next two weeks.