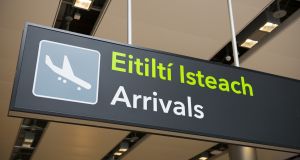 Minister for Foreign Affairs Simon Coveney said the Government is working on the plan ‘and the more we can do together, across the EU, the more effective it can be’. Photograph: iStock

Planning is underway to establish a system allowing airline passengers avoid restrictions if they have received a Covid-19 vaccination.

It is expected to apply particularly to travellers arriving in Ireland from “orange” countries based on the EU traffic light system for air travel.

Minister for Foreign Affairs Simon Coveney said the Government is working on the plan “and the more we can do together, across the EU, the more effective it can be”.

Executive director of the European Medicines Agency Emer Cooke said this week that “all going well” the agency could be in a position to approve new Covid-19 vaccines before Christmas.

The Minister said they will be taking public health advice on the matter but “my expectation is that if people are vaccinated, they will be able to avoid the restrictions that currently apply to international travel, particularly those arriving from orange locations.”

However he warned that “Ireland needs to protect its citizens against the potential threat of a reseeding of the virus through international travel. We must be careful.”

Proof of vaccination will not be stamped on a passenger’s passport but arrangements are expected to be made to include the information on the passenger locator form.

Mr Coveney said his department “currently has no plans” for a passport vaccination stamp. The passenger locator form is currently being amended to include proof of PCR negative tests for the virus and it is likely to be further adjusted to include vaccination data when the vaccine becomes available.

That would provide “further reassurance with regard to international travel”, he said.

Independent TD Marian Harkin called for a vaccination stamp for passports or a digital app or digital identification to show a person had been vaccinated.

In a parliamentary question she asked what preparations the Government is making when the vaccine becomes widely used.

“More people will travel and unless we want to restrict that travel, we need to find a way to make it work,” she said.

Mr Coveney acknowledged that Ireland has been one of the most restrictive countries in the EU for international travel, despite relying more on air travel than any other EU country apart from Malta and Cyprus.

But he said “we are trying to change our approach while making sure that we are continuing to be compliant with public health advice.

“We do not want, following enormous efforts and sacrifices from people, to reintroduce the virus again through international travel, which is a danger if it is not managed right. This is a difficult balance to get right.”