Drivers can renew learner permits once they have booked driving test 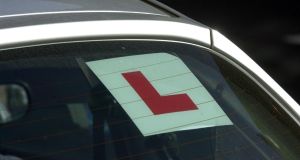 The number of road deaths fell from an annual average of 400 at the turn of the century to 258 today. But resistance to road safety measures persists.

More than 120,000 learner permit holders who obtained their first licence between 1984 and 2016 have never taken a driving test, new figures show.

The Road Safety Authority (RSA) said the 125,860 learner permits issued between 2016 and 1984 remain active, meaning they are being renewed every year.

Under the current rules a driver can renew their learner permit once they have booked a driving test. They do not need to provide proof of having sat the test and there is no legal requirement for a learner driver to take one.

The issue also partly explains the proportion of drivers who fail to show up for their test, with an RSA spokesman saying about 10 per cent of applicants, up to 500 a week, fail to attend.

The RSA said while longer waits for a driving test were an issue for some drivers between 2016 and last year, the average waiting time nationally now stands at 8.4 weeks, following the hiring of additional testers.

The figures were released by the RSA following a Freedom of Information request from The Irish Times and cover the time period from 1980.

The authority said the recent Clancy Amendment – which introduced penalties for learners who drive unaccompanied – has led to a 30 per cent increase in driving test bookings. It believes the legal change will see the number of long-term learner permit holders gradually fall.

Minister for Transport Shane Ross said the practice of “rolling over” a licence for many years and booking but not sitting a driving test is a significant problem and not sustainable. He accused those doing so of “gaming the system”.

“They have been abusing the system . . . [and] it’s just been wrong. It is a terrible problem,” he said. “I came across a guy recently who said he had been driving for 45 years without a full licence.”

Mr Ross said the ability of drivers to renew a learner permit over decades should be gradually removed. He stressed that once a learner permit holder was accompanied by a fully licensed driver – even if they had been driving for many years without taking a test – they were not breaking the law.

A number of proposals to address the issue are being considered by the Department of Transport, including increasing the cost of a learner permit, reducing the length of a learner permit renewed without a driving test from 12 months to six months, or obliging a driver to secure driving lessons before they can renew their learner permit.

The RSA has been aware for years that some drivers were constantly ‘rolling’ their licence. In the current Road Safety Strategy (2013-2020) there is an action stating the need to “reduce long-term reliance on multiple learner permits by introducing measures to ensure that learners sit a driving test before they can obtain a subsequent permit.”

The date for this task was the end of 2014 – since revised to the end of 2018 – but it remains incomplete. A midterm review of the strategy, published at the end of 2016, said the solution to the issue was to “make it mandatory to sit a driving test before renewal of learner permit is granted”.

Susan Gray, founder of road safety group Parc, asked how the RSA could justify taking more than five years to address an issue identified in 2013. She said: “When are they going to get their act together and do their job properly?”