Four ATMs stolen in raids in Meath and Antrim 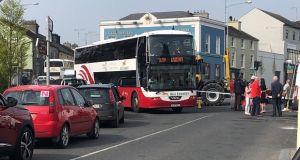 Traffic has backed up in Kells after gardaí closed John’s Street as part of their investigations. Photograph: Tim O’Brien 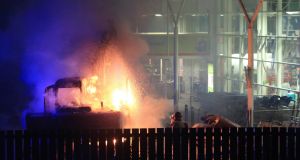 The scene an hour after another double ATM was stolen from the local Tesco Supermarket in Crumlin, Co Antrim. Photograph: Paul McErlane 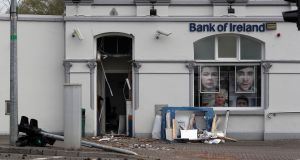 Scene of a double ATM robbery on Main Street, Kells, Co. Meath which occured in the early hours of this morning. Photograph: Colin Keegan/Collins 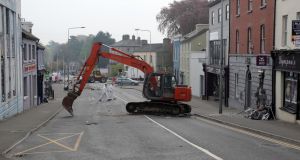 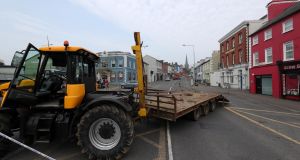 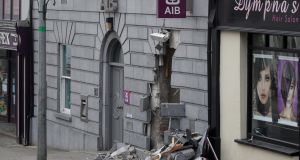 Scene of a double ATM robbery on Main Street, Kells, Co. Meath which occured in the early hours of this morning. Photograph: Colin Keegan/Collins

Four more ATMs have been stolen in overnight robberies, two of them in Kells, Co Meath and the others in Crumlin, Co Antrim.

Seperately, raiders failed in an attempt to steal an ATM from a shop in Craigavon, Co Armagh.

The thefts are the latest in a string of such robberies, 11 in Northern Ireland and five in the Republic, since the beginning of the year.

In Kells, a gang used a digger to rip the cash machine from the wall of the AIB shortly after 4am on Friday and then removed the ATM from the wall outside the Bank of Ireland. The gang also deployed spikes to try and frustrate any Garda response.

The cash machines were driven away on the back of a dark-coloured SUV. It left in the direction of Carnalstown.

Superintendent Dermot O’Connor from Kells Garda station said the robbery was a “well-planned, sophisticated crime, which has ripped the heart out of the community”.

He said the the alarm was raised at 4.20am and that gardaí were at the scene “within minutes”.

He confirmed a device containing spikes was placed outside Kells Garda station, just 500 metres from the scene of the crime but said it did not delay the Garda response.

The thieves also left behind a digger, tractor and a low loader, which blocked the town’s Main Street.

Residents and traders in Kells said they were shocked to wake up to the sound of the town’s two on-street ATMs being stolen.

Supt O’Connor said the alarm was raised at 4.20am and gardaí were at the scene “within minutes”.

He also called for witnesses, particularly anyone in the Kells area between 3.30am and 4.30am or anyone who had seen plant and machinery being moved on the Ardee to Kells road overnight.

Meanwhile, police were alerted at about 3.45am to an incident at Drumgor shops in Craigavon in which raiders tried unsuccessfully to remove a cash machine from a wall using a teleporter machine. They fled the scene, leaving the ATM and teleporter behind.

Minister for Justice Charlie Flanagan said he was concerned by the recent spate of ATM robberies and had spoken to the Garda Commissioner Drew Harris about the issue.

“He briefed me this morning and assured me that An Garda Síochána are following every lead in their pursuit of those involved. They continue to work closely with their PSNI colleagues to target crime gangs in both jurisdictions.”

Mr Flanagan suggested the latest ATM thefts in Kells may be “copycat” crimes.

“It is clear from the facts of what happened in Kells, and what has been happening in both jurisdictions in recent times, that these are organised events,” he said. “These are high profile, brazen and audacious crimes.”

Sarah Farrell and her husband Ronan live directly opposite the AIB branch on John Street and just metres from the Bank of Ireland, the two banks that were targeted by the raiders.

“I was awake until 4am with the baby so when I heard the noise I thought it was the bin lorries,” she said.

“Then I heard the alarms and said ‘wait a minute, that is not bin lorries’. But by the time I was properly awake and got Ronan up, they had gone. Then the guards arrived. It was all very quick.”

On nearby Market Street, butcher Tony Grey showed The Irish Times a video circulated by local traders on their Whatsapp group.

It was recorded just after the raiders left and showed a street with alarms sounding and lights flashing from holes ripped into the front walls of both banks.

The tractor and trailer unit stolen earlier from Farrelly’s plant hire of Castletown was visible, abandoned and blocking the entrance to John’s Street. Further along the street a digger, also understood to be have been stolen from Farrelly’s, was visible.

Brian Curran, a former chairman of Kells Town Council said the loss of the ATMs would create difficulties for the town over the Bank Holiday weekend.

Mr Curran said the thefts had dealt a threefold blow to the town. “There is the safety and security aspect, there is the environmental destruction of the two beautiful buildings and there is a big potential loss of business Easter weekend. Lots of traders have stock in, like Christmas,” he said.

Mr Curran said the town had two in-store ATMs, at the local SuperValu and Centra stores, and said he expected some traders would give cash back to users of debit cards.