No law against wearing paramilitary uniforms in public 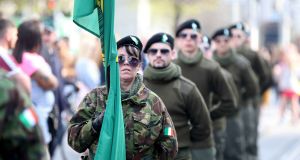 Members of Saoradh after they marched in Dublin city centre on Saturday afternoon. Photograph: Sam Boal/Rollingnews.ie

Every year dissident republican groups hold military-style marches in Northern Ireland and the Republic to mark the 1916 Easter Rising.

In the South, these usually pass without much comment, with most people unaware they are even happening. Not so on Saturday, when members of Saoradh, an unregistered political party with links to dissident paramilitaries, paraded on O’Connell Street.

The timing of the march, less than 48 hours after the murder of journalist Lyra McKee (29) in Derry by a suspected member of the New IRA, enraged people across the political spectrum.

Saoradh, which was founded in 2016, had released a statement in the aftermath of the shooting saying Ms McKee was killed “accidentally” by “a republican volunteer”. The reaction to the murder led to the cancellation of a planned Easter commemorative march by dissidents in Derry on Saturday. The march would have passed down the same street the fatal shot was fired from.

However, an equivalent event went ahead in Dublin, with about 150 members parading down O’Connell Street wearing berets, scarves and camouflage jackets. A similar event took place in Cork on Sunday.

“These demonstrators do not represent the views of the Irish people, who have been united for many decades in rejecting paramilitarism and are rightly revulsed at this display,” Minister for Justice Charlie Flanagan said.

In a statement, Taoiseach Leo Varadkar said the march was “beneath contempt”.

“People North and South are mourning the death of a brave campaigner and journalist, Lyra McKee,” he said. “And on Sunday we marked the heroes of 1916, who put Ireland on the path to democracy. Others like Saoradh want to return Ireland to a violent and troubled past. We can never allow this to happen.”

The display led to many people questioning why almost 200 men and women were allowed parade in military garb down the country’s main thoroughfare. The answer is complicated.

Despite having so many of them, Ireland has remarkably few laws governing public demonstrations. In Northern Ireland all parades must be sanctioned by the Parades Commission, which can set restrictions on aspects such as attire, music and banners. Military-style uniforms are almost always banned unless they are obviously historical.

There is no equivalent in the Republic. In fact, as long as the expected crowd is fewer than 5,000, organisers do not need to notify gardaí or the local authority. The Garda confirmed that it received no notification about Saturday’s event but said it was aware of it anyway and had put appropriate policing measures in place.

There are some laws that could have potentially been used to prevent or restrict the march. However, they were mainly designed for very different situations, and any attempt to impose them on a peaceful demonstration would probably have been open to a legal challenge.

The 1939 Offences Against the State Act outlaws military training or drills except when lawfully sanctioned. But it could be difficult to argue that a commemorative march on a street without weapons constitutes training or drilling.

The 1987 Defence (Amendment) Act outlaws the wearing of the uniform of the Defence Forces “or any colourable imitation thereof” without permission. While Saturday’s marchers were wearing unmistakably military-style uniforms, they were not imitations of those worn by the Irish Army.

In fact the camouflage on the jackets worn by many of the marchers is the same one used by the British army, an irony not lost on several observers.

No calls to violence

Counter-terrorism legislation introduced in 2015 bans any display that may incite terrorist acts. But, although there were banners stating “unfinished revolution”, there were no direct calls to violence either visually or in the speeches.

Security sources say it may have been possible to stop the march by invoking public-order legislation but that this could easily have ended up being counterproductive.

“If we say these people can’t show up, they’re just going to show up anyway. We’ll be forced to arrest them, there’ll be a big outcry and they’d be very happy with that result,” a senior garda said.

“There’s a common-sense policy which takes two things into account. The first is public safety, and the second is the right to assemble. If people want to march peacefully, there’s not much you can do to stop them.”

There may be another reason gardaí aren’t overly eager stop such events, he said. “They’re fantastic opportunities for intelligence gathering.”

“You would have had a dozen plain-clothes [detectives] in the crowd yesterday taking pictures and gathering intelligence. That can be very useful down the line.”