All Irish climbing walls could close after insurance provider pulls out 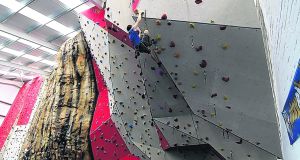 Axa XL, the principal insurer for indoor climbing centres, decided not to renew its Irish business from August 1st.

Indoor climbing centres could soon cease to exist in Ireland due to insurance companies refusing to cover the sport, business owners have claimed.

The situation has arisen after Axa XL, the principal insurer for the activity, decided not to renew its Irish business from August 1st last.

Climbing centres across the State have since struggled to find an alternative insurance provider.

As of Thursday, Suas climbing centre, based near Limerick city, has been forced to operate without public liability insurance after being denied cover by several underwriters.

David Hackett, director of Suas, said the company can no longer allow children to climb the walls as a result, which is putting its future in jeopardy.

“As businesses, we can’t survive without the under-18s, without the kids’ clubs, without the school groups, without the Scouts. We won’t get paid as directors for the next three months, we’ll barely even be able to pay rent,” he said. “We will go out of business. We won’t last past Christmas.”

Mr Hackett said, “Nobody will even quote us. All Irish climbing walls are facing the same situation. We’re just the first one up, our premium is the first up for renewal. It’s like a deck of cards. There will be closures left, right and centre.”

Dave Ayton, managing director of Awesome Walls in Ireland and the UK, said that five years ago there were five or six underwriters willing to engage with the sport, but now there was only one.

“At the minute, there is a possibility that all the centres will close. We’re considering every possibility. We’re actively looking, we’re exploring anything and everything,” he said.

Both the Wall, based in Dublin, and the Dublin Climbing Centre, also confirmed that imminent closure is “a really live fear” as a result of insurance issues.

There are six commercial centres across the country which are banding together in the hopes of obtaining a group scheme and preventing closure.

Industry bodies have said the sector will stabilise once the cost of claims comes down.

A report by the Department of Justice last year showed that payouts for minor ankle injuries could be up to €54,700 in the State, more than four times the maximum in the UK.

The Judicial Council Bill, which was passed through the Houses of the Oireachtas before summer recess, will allow judges to recalculate damages and bring consistency to compensation awards.

A spokesman for the Department of Finance said that Minister of State with responsibility for insurance Michael D’Arcy met several UK underwriters who have recently exited the Irish market.

The spokesman said the companies “expressed a willingness to re-enter the market in the event of a recalibration of awards downwards”.