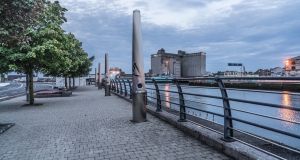 A unique monument dedicated to those who emigrated from Cork city has been damaged by vandals.

The Listening Posts, Cork’s first permanent sound installation, located at Penrose Quay played original recordings of interviews with emigrants and was created by sculptor and Aosdána member Daphne Wright along with Johnny Hanrahan of the CIT School of Music, and British sound designer Dan Jones.

The city council is now being urged to restore the installation which consists of four stainless steel beacons and cost €100,000 when it was unveiled in 2006.

Green Party Cork North East Cllr Oliver Moran says the recordings “tell the stories of hundreds of emigrants who left from Penrose Quay for Britain on the Innisfallen over the decades and their descendants and the people they left behind.”

“These included the voices of emigrants who wanted to return to Ireland and those who were glad they got away as well as the voices of those who worked aboard the ship, bringing them to Britain.”

Cllr Moran said that voices of the emigrants in the Listening Posts were combined with marine, industrial and musical sounds and were played in a random sequence, 24-hours a day, every day.

He said “the artwork is no longer working because of vandalism and it needs to be restored so the stories can be heard again.”

He said it was now an appropriate time to restore the installation as the area is set for increased pedestrian traffic with new large scale developments on Penrose Quay and nearby Horgan’s Quay.

“It’s a very unique monument, and remembers the heritage of the area in a very authentic way. Unfortunately, it’s been badly vandalised, but hopefully salvageable,” he said.

“At least a part of the reason it suffered is from being a little out of the way before, but now we have major office buildings and apartments being built immediately around it.

“That would give the kind of passive supervision that would hopefully deter vandalism again,” said Cllr Moran, adding that developers involved in the development might contribute to the restoration.

“It’s not every place that has an installation by the likes of artists like these. Restoring it would add further value to the developments taking place around it. These kinds of things add a sense of place.

“They place new developments in the docklands in context of the history and community of Cork. It would be especially significant in a place that will now have many newcomers to Ireland, working and living nearby- completing the circle between migration then and today.”