Monks in the age of coronavirus: ‘It goes against our ethos to be closed up’

For the first time in its 190-year history, the abbey of Mount Melleray is closed to visitors 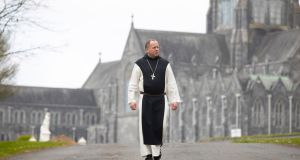 Some 1,500 years ago, Benedict of Nursia encouraged followers to welcome all guests appearing on their doorstep. Known as the Rule of St Benedict, it is an edict followed closely by the Cistercian Trappist monks of Mount Melleray.

Today, however, the rule stands in conflict with the Government’s instructions for all strangers to stay at home, says Dom Richard Purcell, the abbot of Mount Melleray near Cappoquin in Co Waterford.

The abbey closed, in compliance. “It is severe. Normally speaking, we would welcome the stranger in whatever context, and monks should welcome everybody that comes to them as if they were Jesus,” he say. “We all recognise the need for the restrictions but it goes completely against our ethos and our nature to be closed up the way we are. Please God we’ll get to the other side of it in a few months. But it will pass.”

Despite the coronavirus, Dom Richard and Melleray’s six other monks still carry on with the seven daily prayers from 4am to 8pm that have marked the abbey’s day since it was built in 1833 at the foot of the Knockmealdown Mountains. “We’re very lucky in that we have two things that a lot of people don’t have: routine and space,” Dom Richard says, pointing towards the rolling green fields belonging to the abbey.

In the days prior to the tightening of the Government’s restrictions on movement late last month, Melleray saw a deluge of people arrive to its grounds, almost double its usual number for the time of year.

“That last weekend the church was open, there was well over a thousand candles lit here in the course of the afternoon,” Dom Richard says. “They were looking for hope. They were people coming up to pray for family and friends who are sick because that’s the most frightening thing about it. The big thing is the unknown.

The consequences of the coronavirus were brought home to Melleray last month with the death at the age of 96, of Fr Columban Heaney. The oldest Cistercian monk in Ireland, he had spent almost 70 years living a monastic life. In normal times, his funeral would have brought hundreds to Melleray: “He had family in Derry and in Scotland who couldn’t come, as well as older family members who would not be allowed to travel,” says Dom Richard. “It was extraordinary. We had the funeral with just the seven monks and five undertakers. The funeral was livestreamed so the family could see what was happening.” According to Facebook, over 7,000 people watched.

Like other religious institutions, Melleray is live streaming its services, though the 44-year-old abbot, who was elected in 2017, admits it is “harder to gauge” the people’s mood as the days have passed. “We’re cut off,” he says. However, he sees live streaming of services as “an opportunity” to maintain connections. “The usual ways for meeting people are not there so we’ve had to find new ways to evangelise.”

Before Covid-19, the people who came to Melleray ranged from traditional Catholics to the spiritual, or those who were “searching” for a connection with God. Asked if the legacy left by the crisis, and the breaking of old certainties will boost numbers afterwards, he is wary: “We’ll have to wait and see on that one.” He is optimistic for Melleray, though.

The first order of business after the restrictions are lifted will be a requiem Mass for Fr Columban, one attended by his family, friends and neighbours.