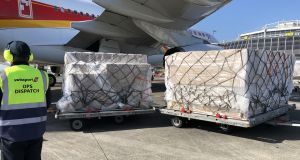 Dublin-based aircraft leasing company Avolon has raised €350,000 in donations to fund a cargo shipment of personal protective equipment (PPE) in less than five days, the company has said. Photograph: Avolon

Dublin-based aircraft leasing company Avolon has raised €350,000 in donations to fund a cargo shipment of personal protective equipment (PPE) in less than five days, the company has said.

The Irish business delivered a 15 tonne consignment of PPE to Ireland last Tuesday, which included masks, goggles, gloves, face protectors and 40 ventilators that the HSE had bought, Avolon had sourced and a shipment purchased with funds donated by businessman Liam Casey and Irish rockband U2.

Avolon then announced it was continuing its efforts to help frontline staff in the battle against coronavirus by chartering a Boeing 787, which has three times the cargo capacity of the first plan and can transport a further 70 tonnes of PPE supplies.

The company opened up a crowd-fundraising drive seeking € 350,000 to cover the cost of the flight and it has since reached that target.

In a statement on its website, the company thanked the public for their support of the “remarkable people working on the frontline of our healthcare services”.

“Thank you everyone who has so kindly donated to this fund. Incredibly, in less than five days, today Sunday April 12th, we have reached the €350,000 target,” the statement said.

“Therefore we will no longer be accepting donations. Your generosity has been overwhelming. It will make a real difference on the front lines for our heroic healthcare professionals.”

Last week, U2 announced that it was donating €10 million for the sourcing and purchasing of PPE, in a bid to support frontline healthcare workers during the pandemic.

“Bono and Liam have committed that whatever cargo the airplane they can take, they will fill it,” said Avolon founder and chief executive Dómhnal Slattery last week.