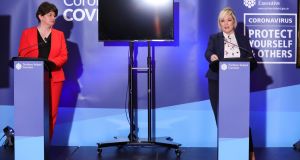 Northern Ireland’s First Minister, Arlene Foster, has rejected Deputy First Minister Michelle O’Neill’s criticism of how the British army was “unilaterally” requested to assist in dealing with the coronavirus crisis.

The death toll from Covid-19 in Northern Ireland rose by 25 over the Easter weekend.

Ms O’Neill, of Sinn Féin, complained on Saturday that Ulster Unionist Party Minister for Health Robin Swann had “unilaterally and without consultation with Executive colleagues requested limited assistance from the British army”.

“Sinn Féin has made it clear we will not rule out any measure necessary to save lives, protect the public and tackle the spread of coronavirus,” Ms O’Neill said.

She said Mr Swann had a responsibility to “exhaust” all other options for support and indicated her view that such a decision collectively was for the Executive to take rather than for a single minister.

“No proposal to use British military personnel in the North for roles normally performed by civilians has come before the Executive,” she added.

“I have raised the sensitivities of British military intervention directly with the British secretary of state, Brandon Lewis.”

Mr Swann told the BBC he had made a formal request to the British army for help in distributing life-saving equipment. He also requested help from the British ministry of defence in planning for a so-called Nightingale hospital, designed to treat coronavirus patients, at the site of the former Maze prison near Lisburn.

“I believe the army’s skills and logistical expertise could assist with the redistribution of essential life-saving equipment across Northern Ireland to ensure that all hospitals have the materials and resources required to fully enact their surge plans,” Mr Swann said on Saturday. He hoped his decision was not “considered divisive”.

In a statement on Sunday a Department of Health spokesman said Mr Swann “publicly stated his intention to make a request for military assistance on Friday April 3rd”.

“That request was submitted on Friday, [April 10th], and both the First and Deputy First Ministers were informed of the decision. The Minister for Health is happy to discuss the matter if they require any further information.”

“When your loved one is lying in hospital, who built the ward will be the last thought on their mind. Let’s build the capacity we need. We fully support the army being used to build necessary beds,” she posted on Twitter.

That was the majority reaction, including from the nationalist SDLP. Its policing spokeswoman, Dolores Kelly, said “there would be no role for military personnel in security matters but that in the middle of a public health emergency, political leaders must be prepared to do the uncomfortable to save lives”.

“The raw reality is that people are dying and we must all be prepared to do whatever it takes,” said the Upper Bann MLA.

The Alliance Party also supported Mr Swann’s action, although Gerry Carroll, a People Before Profit MLA for West Belfast, expressed concern this “latest announcement may open the door to a security or military-led approach to deal with a health pandemic”.

There were 11 more deaths in Northern Ireland from coronavirus, the North’s Public Health Agency reported on Sunday, bringing the number of deaths in the North over the Easter weekend to 25.

In total there have been 118 confirmed Covid-19 deaths in Northern Ireland.

There were also 89 new confirmed cases of coronavirus in the North on Sunday, bringing the total number to 1,806. The number of people tested for the virus was 12,199.

And as the PSNI stepped up patrols to ensure people observed the coronavirus restrictions, particularly against anyone seeking to use their holiday homes, Chief Constable Simon Byrne posted on Twitter that most people were “adhering to social distancing”.