Varadkar moves up the ranks for time in office as Taoiseach 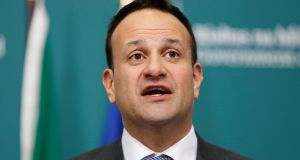 Leo Varadkar: on Friday the Taoiseach will become the 11th longest-serving in that role. He first took office on June 14th, 2017. Photograph: Leon Farrell/Photocall Ireland

Leo Varadkar will later this week become a longer-serving Taoiseach than his predecessors Brian Cowen and Albert Reynolds.

On Tuesday (April 14th) Mr Varadkar will equal Mr Cowen’s tenure in office. The Fianna Fáil leader served as taoiseach for 1,036 days between May 2008 and March 2011 in coalition with the Green Party.

On Thursday, Mr Varadkar’s tenure will equal that of Mr Reynolds, who was taoiseach in the Fianna Fáil Labour coalition for 1,038 days from February 1992 to December 1994.

Then on Friday the Taoiseach will become the 11th longest-serving in that role, having first taken the office on June 14th, 2017.

Last year he moved from being the shortest serving Taoiseach on Christmas Day when with 925 days in office he overtook John Bruton who served for 924 days, in the Fine Gael-led rainbow coalition between December 1994 and June 1997.

Mr Varadkar’s immediate predecessor Enda Kenny is Fine Gael’s longest-serving taoiseach, in office for 2,289 days from March 2011 to June 2017 and became the party’s first leader to secure a second consecutive term in office.

Mr Kenny is followed by John A Costello, Garret FitzGerald and Liam Cosgrave as the next long-serving Fine Gael taoisigh.

Ireland’s longest serving taoiseach by far is Fianna Fáil leader Eamon de Valera with a total of 7,735 days in office (21 years and two months) over three terms in office between 1932 and 1959.

Bertie Ahern is the second longest serving taoiseach in the history of the State with 3,968 days in office, leader of three successive Fianna Fáil coalitions from June 1997 to May 2007 with the Progressive Democrats and in the third administration also with the involvement of the Green Party.