Down the drain? Time to be called on kegged beer when lockdown ends 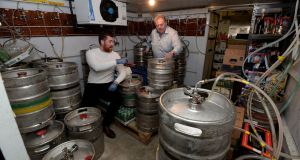 Millions of pints of beer in barrels will have to be converted into animal feed or fertilisers as a result of the Covid-19 pandemic – though the cost will fall on the breweries, not the publicans.

The sudden closure of pubs on March 15th has left thousands of unused barrels in pubs around the country. At the time, the big breweries promised to take back unused stock and issue the publicans with credit notes.

However, the more general restrictions on unnecessary movements which came in on March 27th meant that was not possible given the scale of operations involved.

“We also started to prepare for the lifting of any opened kegs in outlets. The tightening of Government travel restrictions on March 27th meant this work had to be paused to protect our employees and our customers.

“When these restrictions are lifted and it is safe to do so, we will recommence this work swiftly,” a company spokesman told The Irish Times.

Barrels are usually in date for a period of up to four months, but the lockdown is likely to have lasted at least seven weeks by the time restrictions are lifted. Even then there is no guarantee the pubs will be allowed to open.

Kegs that were already opened will certainly be disposed of as beer from them is supposed to be drunk within two weeks. The restrictions came in just as publicans had ordered stock for the St Patrick’s weekend.

“We were locked and loaded for Paddy’s Day,” with extra stock brought in for the national holiday, when public houses were ordered to shut on March 15th, said Cork pub owner Benny McCabe.

“It’s a tragedy but we all just have to suck it up,” said Mr McCabe, who owns the Crane Lane Theatre venue and more than a dozen pubs in Cork, as well as Arthur Maye’s in Donnybrook, Dublin.

When the lockdown is nearing its as-yet-unknown end, brewing companies will bring the beer back to their plants and wait for Revenue officials to come and measure how much they have.

The brewers will claim back excise duty on beer they have already sold to pubs but which they will now be taking back and replacing with fresh products.

Then the stout, lager and ale products will all be disposed of.

The brewers have decided to take a hit over the great beer throwaway.

They have told pub owners they will not charge them for beer they take back when shutters on the nation’s public houses are finally reopened.

Ireland has about 7,000 pubs. A modest pub will have as many as 10 different beers on draught, with many drinking emporiums having more than twice that number.

Once a barrel is hooked up to a beer tap, brewers recommend that it be used up within a week or two, and once opened it cannot be sealed again and kept for later use. Most kegs hold up to 90 pints.

A source for a major brewery said the beer will not be poured away. Instead, it will be evaporated off and the remainder converted into animal feed or fertiliser.

In a statement, Diageo, which owns Guinness, said it will have a “comprehensive plan in place to facilitate the return of aged kegs when government restrictions are eased”.

Pub owners are delighted that their businesses, already badly shaken by the lockdown, will not be facing another loss when they finally reopen.

“The brewers have stood by their customers,” said a spokesman for the Vintners’ Federation of Ireland, which represents pubs outside of Dublin.

“They have sent letters out to pub owners to say that they will be taking the kegs back. They’re doing a great job in working with us.”

He said he would love to be able to at least give away the beer to customers “on the house”, but even that won’t be possible.

“We couldn’t because that would create a gathering.”