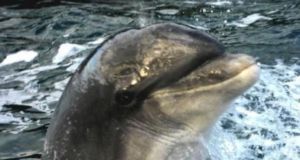 A fisherman has claimed he has seen ’missing’ dolphin Fungie

A fisherman who spotted ‘missing’ Fungie after concerns had emerged in Dingle about his welfare has said that the beloved cetacean is safe and well and that he sees him “as regularly as you would see the same person at a pedestrian crossing”.

Fisherman Paul Hand told the Irish Times that Fungie, unlike the rest of Ireland, is able to hang out with his friends and doesn’t have to social distance.

“I saw him yesterday morning. There is a lot of feed around Dingle Bay at the moment. It is not common to see a lot of bottlenose dolphins inside in Dingle Bay. Pods of them come from time to time, and he mixes with them, and he goes out to the bay during the summer and comes back.

“Every dolphin on the planet knows that better than ourselves. So Fungie has gone out with the pod of dolphins.

Mr Hand joked Fungie clearly “doesn’t believe in social distancing” and is living the high life for the autumn cavorting with his pals in Dingle Bay.

Mr Hand said he came in from fishing yesterday evening to his nephew telling him that reports had gone up on social media that Fungie was missing.

“I said ‘there is dolphins in the harbour he is probably out with them.’ He is 100 per cent alive. I mean if your dog goes missing you don’t say they are dead,” Mr Hand said.

Concerns had developed in Dingle after the dolphin had not been seen since Wednesday. In a post last night the Facebook Page “Fungie Forever Photos of the Dingle Dolphin” page said Fungie had not been seen for the best part of two days.

“For the past two days Rudi and I have been searching for Fungie everywhere. There is absolutely no sign of him. Today I raised the alarm and I have to thank Mary and Mick O’Neill from Dingle Boat Tours who were so kind to take us on a very long search along the coastline and search in places we could not reach with our own small boat because of the waves. Meanwhile two other boats started a long search as well.

“We are very upset because it looks like we have lost our best friend. Fungie was a part of a lot of people’s lives. He was and is and will always be loved all over the world.”

The two people behind the page, Jeannine Masset and Rudi Schamart, regularly post pictures of Fungie and track his movements.

The couple, who are from the Netherlands but living in Dingle, take their little rubber Dinghy out daily to search for Fungie. They have been tracking the friendly dolphin for more than 25 years.

Their YouTube and Facebook pages attract thousands of hits annually. The dolphin has been seen in the area since 1983.

Last year a Lone Rangers report from wildlife experts identified Fungie as the longest living solitary cetacean in European waters. In the global list he is second only to Jojo, another bottlenose dolphin of the Turks and Caicos Islands in the West Indies who has been dated back 40 years.

Fungie’s presence in Kerry has created an industry of boat operators who have taken thousands out to see him.

News of his possible passing flooded social media. One person tweeted “Fungie is missing. That’s it 2020. I have had enough.”