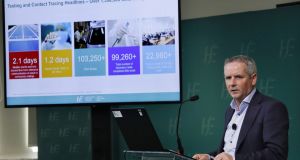 Paul Reid said more than 103,250 swabs were carried out in the last week with a turnaround of 2.1 days and a positivity rate of 5.5 per cent. Photograph: Leon Farrell/Photocall Ireland

Some hospitals are already using their intensive care (ICU) surge capacity to cope with the recent spikes in cases in Covid-19, the HSE chief executive Paul Reid has said.

Covid-19 hospital admissions increased by 62 per cent from October 6th when there was 142 patients in hospital last week to 230 this week.

Mr Reid said there is now some impact in elective care and in other hospital services. Operations have been cancelled at Cavan General Hospital.

Cork University Hospital has put in extra bed capacity and is looking at private bed capacity.

Beaumont Hospital, one of the biggest in the State, is also under pressure as a result of Covid-19, he added.

The numbers of Covid-19 patients in hospital reduced from 234 to 214 overnight and the number of those in ICU units across the State stayed steady at 30.

However, he cautioned that this was a “blip” and the overall trend in numbers remains upwards.

He said all hospitals across the State are “under pressure but managing - the main concern is looking ahead to the coming weeks”.

He said only the public can turn the current trends in Covid-19 around and that they have sufficient information to do the right thing.

HSE National Clinical Advisor Dr Colm Henry explained that the “surge” capacity in ICU is not ideal for treating the disease.

He explained that death rates in ICU in Ireland were half of what it was internationally during the spring because the HSE did not generally use surge capacity in the first phase of the pandemic, instead using existing beds and specialist staff.

Approximately 21 per cent of patients admitted to ICU died in Ireland in comparison with rates of more than 40 per cent elsewhere.

“We would like to think the care is excellent in Ireland,” he said. “Our healthcare was largely giving within ICU settings rather than lean into surges.”

Mr Reid said more than 103,250 swabs were carried out in the last week with a turnaround of 2.1 days and a positivity rate of 5.5 per cent.

Almost 60,000 tests were carried out in nursing home settings with 266 cases detected.

Some 384 school facilities were identified as having a possible Covid-19 case in the last week last week. A total of 9,345 adults and children were tested with a positivity rate of 1.8 per cent.

The number of contact tracing calls went from 18,124 to 22,984 last week. The rise of 27 per cent is a “huge indication of the pressure on our contact tracing teams,” he said.

Mr Reid said there had been a mistake in the job specification for contact and trace staff which suggested employees would only have zero hour contracts.

He said this was a mistake that has been rectified by the agency CPO and now between 50 and 75 contact tracers are being recruited on a weekly basis.