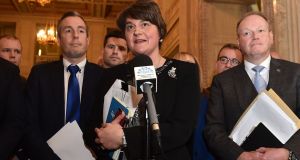 DUP leader Arlene Foster speaks to reporters after a meeting of the Stormont Assembly on Monday ahead of changes to laws on abortion and gay marriage in Northern Ireland. Photograph: Charles McQuillan/Getty

Cabinet Ministers have been warned to be mindful of DUP sensitivities in light of the party’s opposition to the revised Brexit deal, as well as changes to abortion law and the introduction of same-sex marriage in Northern Ireland.

Tánaiste Simon Coveney made the comments at the weekly Cabinet meeting as he gave a Brexit update and outlined progress on efforts to restore the Northern Ireland institutions.

Arlene Foster’s party has voted against the new withdrawal agreement negotiated between the EU and British prime minister Boris Johnson.

The DUP has strongly objected to the customs arrangement in the deal, which would see a customs border in the Irish Sea, and its consent mechanisms for the Stormont Assembly.

One Minister present at Cabinet said the Tánaiste spoke about Brexit and “abortion and marriage equality as well”. Others said there was also mention of loyalist meetings in Belfast this week in opposition to the Brexit deal.

Another member of the Cabinet said Mr Coveney – who is expected to travel to Northern Ireland for talks today – asked colleagues to be “careful and sensitive about the fragility of the North”.

“There is a general worry about things flaring up,” the Minister added. It was also pointed out that there had been no major public reaction from the Government in the Republic to the abortion and same-sex marriage changes in the North.

The Stormont Assembly sat for the first time in more than 1,000 days on Monday to consider a DUP Private Members’ Bill that would have put any change in the North’s abortion laws in the hands of MLAs rather than Westminster.

Abortion was decriminalised from Tuesday in Northern Ireland, despite the last ditch attempt by unionists to override Westminster legislation.

The DUP motion failed because it could not proceed without a new speaker being elected. This would have required a cross-community vote, but Sinn Féin boycotted the sitting and the SDLP walked out.

Mr Coveney is also understood to have said that progress on restoring Stormont will be easier if the Brexit withdrawal agreement is passed and the UK leaves the EU in an orderly fashion.

This was echoed yesterday by Michelle O’Neill, Sinn Féin’s leader in the North, who said expected clarity on Brexit in the coming weeks could help with efforts to restore the Stormont institutions.

Ms O’Neill also said a British general election and publication of the much-anticipated report into the Renewable Heat Initiative (RHI) debacle may also be needed in advance of any restoration of powersharing in Northern Ireland.

Speaking in Dublin, however, Ms O’Neill said this was not the view of Sinn Féin, which she said stood ready to re-engage in getting the Northern Ireland executive and assembly back up and running.

She said it was significant that Julian Smith, British secretary of state for Northern Ireland, on Monday extended the period during which fresh Stormont elections can be avoided.

“But that period only runs to the 13th of January. We are very quickly running out of road in terms of being able to put the institutions back together.”

The institutions collapsed in January 2017 over the RHI controversy and Ms O’Neill said it would not be “sustainable” to have Stormont inactive for three years.