Minister warns about ‘complacency’ in North around social distancing 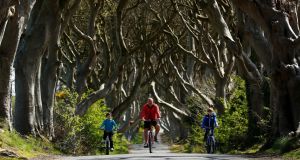 The North’s Minister for Health says he is reluctant to put a timetable on the steps needed to emerge from lockdown. Photograph: Reuters

The North’s Minister for Health warned of “complacency” over adherence to social distancing measures as the number of coronavirus-related deaths in hospitals in Northern Ireland rose to almost 300 over the weekend.

Robin Swann told BBC Radio Ulster that people were becoming more relaxed, and he was “concerned people are starting to ease up on their responsibility”.

The North’s Department of Health reported a further five coronavirus-related deaths on Sunday, bringing the total number of fatalities in the North to 299.

A further 874 tests were carried out on 686 patients, resulting in an additional 82 confirmed cases of coronavirus in the North. The total number of confirmed cases now stands at 3,308.

The daily Department of Health figures include only deaths in hospitals among patients who have been confirmed to have the virus.

The most recent figures from the Northern Ireland Statistics and Research Agency, which include deaths in all settings including care homes and hospices, show that the number of fatalities up until April 17th is approximately 30 per cent higher than that reported in the daily statistics.

To anyone who flouted the coronavirus regulations, Mr Swann said: “I think they should be seriously thinking and looking at themselves as to what the impact and the implications of their unnecessary travel [are].”

He said he understood the “frustration” in many households, adding “we don’t have a medical cure for cabin fever, but what we are asking people is just for that good will, that determination, just over the next number of weeks to help the health service save lives”.

According to the PSNI, 358 fines were issued for breaches of coronavirus legislation between March 30th and April 24th. The police also issued 570 community resolution notices, which to do not involve a fine.

There were 89 fines issued in Belfast, with 52 in Derry and Strabane, and 50 in Newry, Mourne and Down. The lowest number was in the Causeway Coast and Glens area, where only nine were issued.

Assistant Chief Constable Alan Todd said the “vast majority” of people spoken to by police had “co-operated well, and a relatively small number of penalty notices have been issued to date”.

Meanwhile, cemeteries in the North reopened on Sunday for the first time since their closure last month.

The North’s Executive agreed on Friday that they should reopen following calls from the public and from church leaders.

First Minister Arlene Foster said it was about “balancing public health concerns with the basic human need to visit a loved one’s grave”.

Milltown Cemetery in west Belfast was busy on Sunday, with people queueing to enter.

A phased reopening has been put in place at Roselawn and Belfast City cemeteries, which are operated by Belfast City Council.

The graveyards will reopen on Tuesday and Thursday evenings and on Sundays to reduce the numbers on site and to keep social distancing measures in place.

At the City Cemetery in Derry, a one-way system and a cap on numbers has been introduced. – Additional reporting PA.