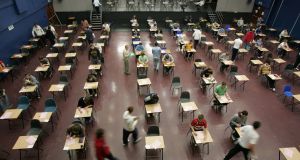 The TUI’s Dublin City branch says there are mounting health and safety concerns over pressing ahead with the Leaving Cert exams. Photograph: Frank Miller

The Teachers’ Union of Ireland has distanced itself from one of its branches which has callled for the Leaving Cert exam to be cancelled due to health and safety concerns.

The TUI’s Dublin City branch says there are mounting concerns over issues such as the ventilation of exam halls, physical distancing and questions such as whether students will need to wear face masks.

As part of its motion calling for the exams to be cancelled , it states that “there is a risk that if the exams were to go ahead it might reach more viral clusters and a possible second wave outbreak, placing our members and students and the broader community at risk.”

The branch’s position conflicts with the official TUI position, endorsed by its executive committee, which has stated that the best option available is to proceed with the Leaving Certificate on 29th July, subject to the advice of the public health authorities at the time.

In a statement, a spokesman for the TUI distanced the union from the Dublin City branch’s position.

“The matter of most paramount importance is and will remain the safety and welfare of students and their families, school staff and the general public,” the spokesman said.

“ The union is also mindful of the need to provide students with the best opportunity to progress to the next step of their chosen paths, be it employment or further study.

“It is obvious that any arrangement in the current circumstances will not be ideal, but it is incumbent on all stakeholders to do what is best in the interests of our students.

“In formulating its policy, the TUI always takes account of the variety of views brought through the democratic structures of the union.’

Some members of the TUI Dublin City branch are closely aligned with a more hardline faction within the union, which calls itself TUI Grassroots.

It has found itself in conflict with the head office on numerous occasions in the past by seeking a tougher stance on issues such as two-tier pay and working additional “Croke Park” hours.

In its statement, the TUI Dublin City branch said it acknowledges the efforts of teachers in delivering distance learning to students, but says this is no substitute for class teaching.

Given that a final decision will not be made on holding the Leaving Cert until early June, the branch says it would be better to “cancel the exams and instead issue Leaving Certificates to all students stating the subjects and the level the student has studied.”

The statement does not outline whether grades could be applied to students or whether this alternative is a workable solution for entry into further and higher education.

It states that the long gap between school closures and the planned commencement date for the exams places an “unnecessary mental health burden on all students.”

It also goes on to claim that health and safety rules will “compel students to wear face masks during the exam with a protective screen around their desk which will add to the stress/discomfort.”

Authorities, however, have indicated that no decisions have yet been made on what kind of physical or social distancing measures will apply during the exams.